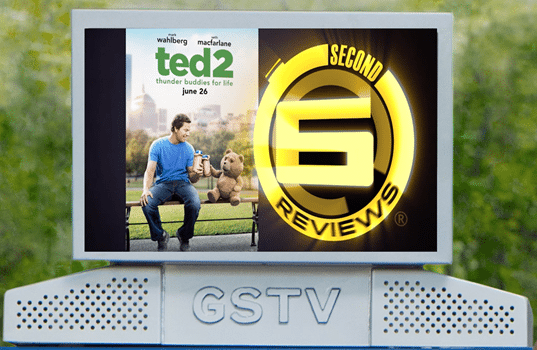 The Gas Station TV (GSTV) video network at the pump, and Six-Second Reviews, the short-form entertainment reviews from America’s most popular movie personality, announced their partnership with the premiere of Six-Second Reviews on the GSTV network, with Slim Jim as the exclusive launch sponsor.

Six-Second Reviews provide audiences with short videos that feature a brief synopsis and a final verdict of ‘I’m in’ or ‘I’m out’ featuring Russ Leatherman, (aka “The Movie Man”) founder of Moviefone and Six-Second Reviews. “Our fast-paced reviews of movies, TV shows and other entertainment is absolutely perfect for the millions of busy on-the-go consumers that GSTV reaches,” said Leatherman.

In partnership with their planning and investment agency, Spark SMG, Slim Jim was the first brand to take advantage of this all-new content segment on GSTV with the review of the movie Ted 2. The complete fifteen-second pod ran the movie review followed by a custom brand integration driving viewers to ‘Slap into a Slim Jim’. “Six-Second Reviews is a truly unique segment from GSTV that speaks to the essence of the Slim Jim brand,” said Heather Dumford, Global Marketing Director, Media at ConAgra Foods, Inc. “It’s quick, appealing and something people want again and again.”

GSTV will fill its network with a wide variety of reviews, ranging from TV and movies to music and video games. Six-Second Reviews is an ideal complement to entertainment content already popular with GSTV’s audience.

“Adding Six-Second Reviews is another example of how GSTV keeps innovating to deliver our viewers the best experience at the pump,” said David Leider, GSTV President and CEO. “The integration with Slim Jim shows how GSTV works with our advertising partners in different ways to deliver exceptional value.”

GSTV delivers an industry-leading experience at the pump to 52 million monthly viewers through exclusive long-term partnerships with premium content partners such as ESPN, CNN’s Headline News and The Buzz Today, Bloomberg Television and AccuWeather. This all-new Six-Second Review custom integration with Slim Jim can be viewed by clicking here.