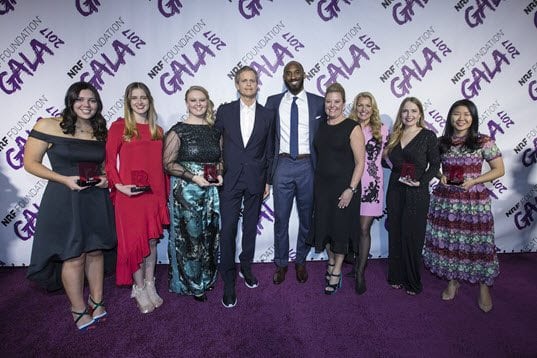 “The Gala surpassed any of our expectations, which is a testament to the support and commitment of the individuals who make up this dynamic industry,” NRF Foundation Executive Director Ellen Davis said. “We are extremely thankful for the contributions of our supporters and guests, including the esteemed members of our host and executive committees and board members. We look forward to bringing these leaders together in 2018 to once again celebrate the imagination, inspiration and innovation in the retail industry.”

The sold-out Gala was attended by nearly 780 retail CEOs and senior executives, industry insiders, celebrities, students and scholarship recipients who came together to support the Next Generation of retail talent and to celebrate The List of People Shaping Retail’s Future. In addition, five-time NBA champion Kobe Bryant presented NRF’s “The Visionary” award to Nike Chairman, President and CEO Mark Parker, a new honor for an inspiring leader with a long record of spearheading change in the industry.

In addition to members of the National Retail Federation’s Executive Committee and Board of Directors and the NRF Foundation’s Board of Directors, other notable guests included Daymond John, co-star on “Shark Tank,” Miss America 2017 Savvy Fields and Wé McDonald, finalist on “The Voice,” as well as host committee members Alexis Glick, CEO of GENYOUth, Michael Clinton, President, Marketing and Publishing Director of Hearst Magazines, and Randi Zuckerberg, CEO of Zuckerberg Media and Executive Producer of DOT.

The Gala capped off the first day of Retail’s BIG Show, welcoming almost 35,000 retailers and their business partners from around the world at the Javits Center to New York City, January 15 – 17, 2017.