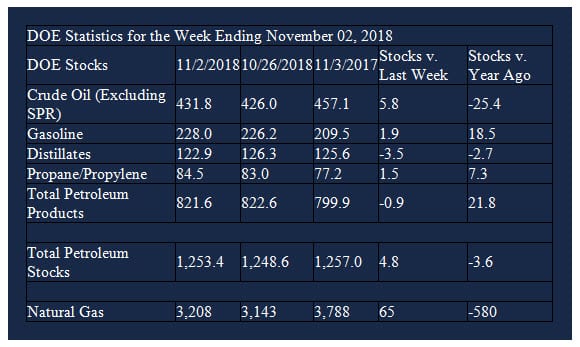 The Energy Information Administration reported U.S. crude oil production of 11.6 million barrels daily for the week ending November 2, 2018. This was record output and was a 400,000 barrel-per-day increase over the prior week. And it’s consistent with EIA’s latest projection of crude oil output for 2019 that puts output at 12.06 million barrels daily. The details of the projection include an expectation that U.S. output will break 12 million barrels per day as soon as the second quarter. More important, however, this level of output will solidify the United States’ position as a key leader in global petroleum policy. 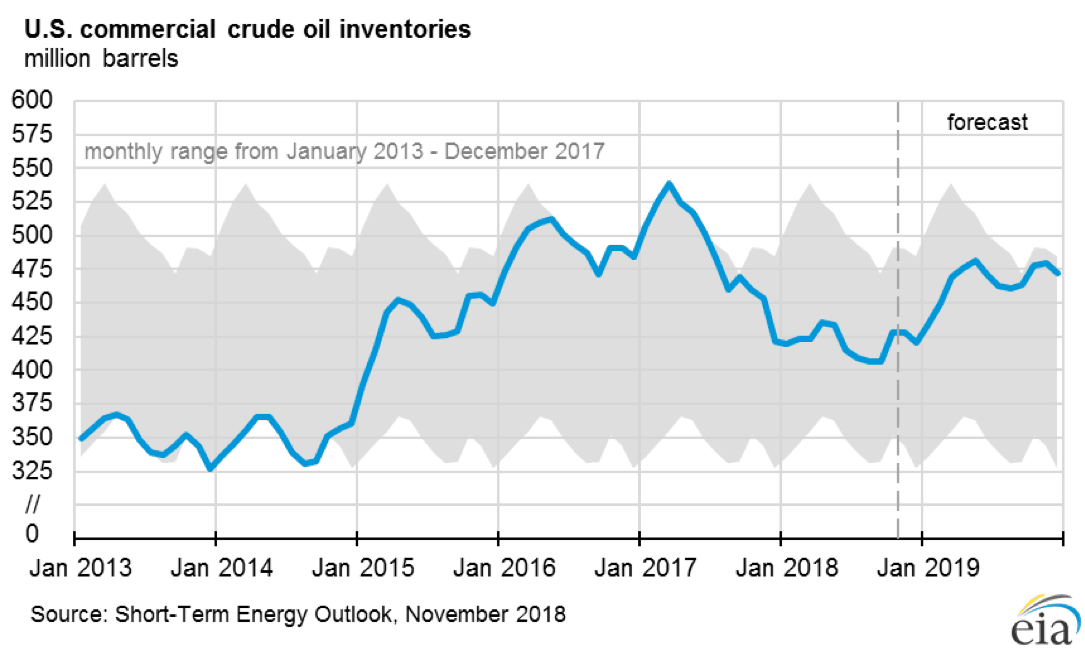 It was bearish for price and was reflected in a 5.8-million-barrel increase in crude oil inventories. It comes at a time when concerns over an international economic slowdown are growing.  In particular, tensions between the United States and China could inhibit further economic gains.

There are offsetting bullish factors that could limit the downward pressure on prices. Russia and Saudi Arabia have reportedly been in discussions about cutting production in 2019. This is against a background of failing production by several traditional suppliers and uncertainty about the implementation of sanctions on Iran. Early in 2018, a modest crude oil surplus served to retard OPEC production increases. By mid-year, demand had picked up, the situation in Venezuela became more apparent and Saudi Arabia and Russia boosted supply.

The remarkable expansion of American shale production now in the books should certainly lead to a review of Russo/Saudi Arabian plans for 2019. Lower output by these two production leaders will have to be set against lower contributions to supply by Venezuela and Libya and others now bumping into production ceilings from traditional fields.  Finding the right balance will be a serious challenge next year.

Supply/demand data in the United States for the week ending November 2, 2018 were released by the Energy Information Administration.

Refineries used 90.0 per cent of capacity, an increase of 0.6 percentage points from the previous report week.

Natural gas stocks ended the refill season lower than the five-year minimum in all regions. Working natural gas in storage in the Lower 48 states as of October 31 totaled 3,208 billion cubic feet (Bcf), according to interpolated data from EIA’s Weekly Natural Gas Storage Report released November 8. Inventories as of October 31 were 598 Bcf (16%) lower than the five-year (2013–17) end-of-October average and 569 Bcf (15%) lower than last year. This level is the lowest end-of-refill season level for working gas stocks since 2005, and inventory levels in all regions were lower than their five-year minimums. Although the natural gas storage injection season is traditionally defined as April 1 through October 31, injections often occur into November.

Expectations of colder weather were reflected in an end-of-week rally on November ninth. Spot natural gas futures broke through resistance at $3.66. This level was last seen early last February. Additional resistance was established at $3.99 at year-end 2016.

This rally has caught many buyers flat-footed. Natural gas open interest has been declining throughout October, indicating that fewer buyers were covering their needs. There were 1.7 million natural gas futures at their recent high on October 4th. By November 7, open interest fell to 1.5 million contracts, a drop of 12 per cent. This is consistent with natural gas futures price patterns. This is shown in Powerhouse’s chart below. Typically, natural gas prices bottom in September, moves higher into October when a flat period occurs before a further rally into year-end. We expect 2018 to closely follow that pattern. 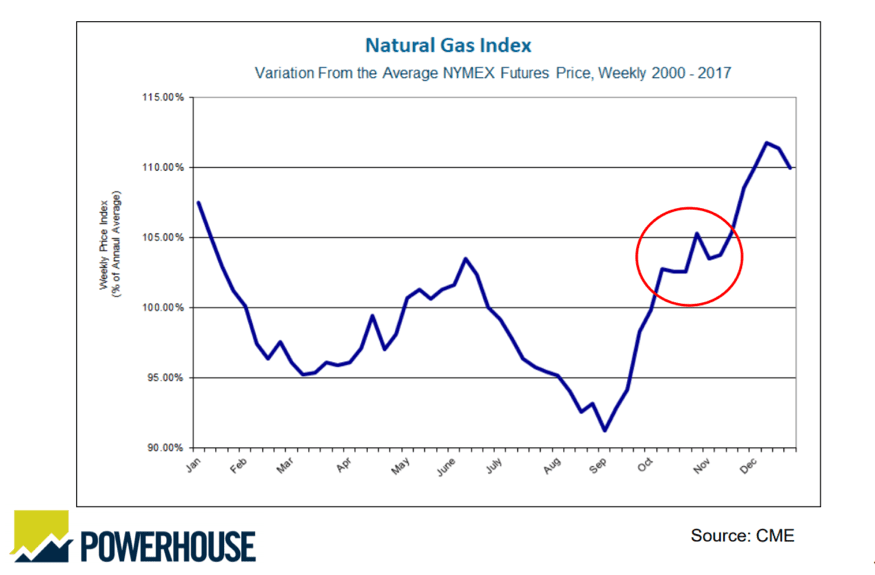 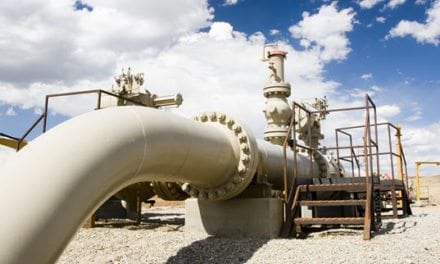 API: Gov. Cuomo’s Rejection of Constitution Pipeline an Assault against Consumers and Businesses

NRF: “A Lot of Work Ahead” for Health Care Reform