Changes in the organization of the petroleum industry have been far-reaching. Methods of production, pipeline distribution, and product specification are examples of those changes.

Perhaps no change has been as dramatic and geopolitically significant as the United States emerging as a net exporter of crude oil. The U.S. enacted limits on the export of crude oil in 1975. These export constraints were a response to price and supply volatility developing as OPEC expanded its market power.

The United States was in a period of declining domestic production in the 1970s. By the mid-2000s, however, fracturing technology became significant, and U.S. crude oil production started to rise.

The pressure to allow exports grew, especially as pipeline distribution patterns did not fully reflect U.S. refinery requirements. Domestic crude oil exports started in December 2015 for the first time in many years. 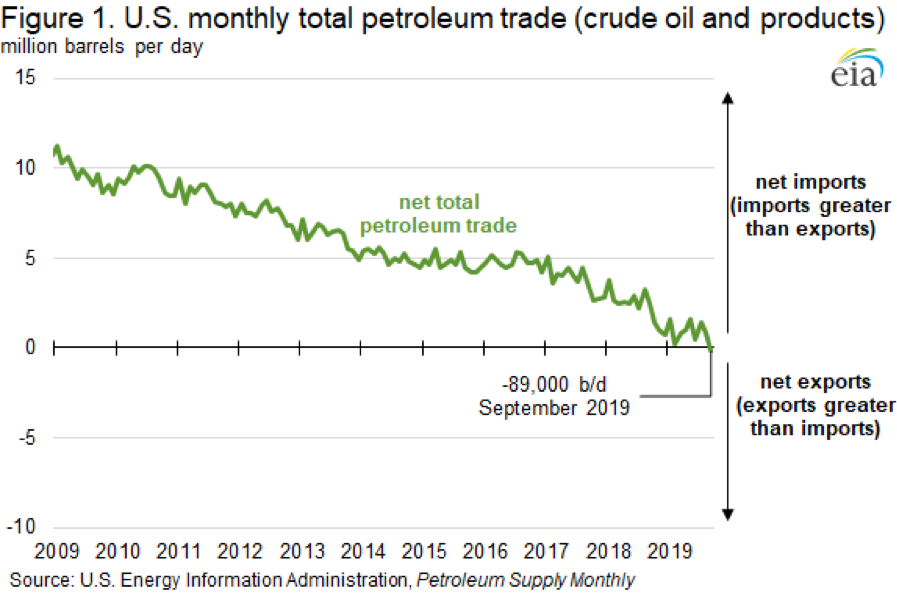 In September 2019, exports of crude oil and products exceeded comparable imports by 89,000 barrels per day. The United States became a net exporter for the first time since monthly record-keeping began in 1973. (See Figure 1.)

The fact of net export status for the United States is more than a matter of statistical interest. The country is still a net importer of crude oil. It imports heavy high-sulfur crude oils that are well-configured for domestic refineries.  Most of U.S. crude oil imports come from Canada or Mexico, limiting our exposure to political uncertainty overseas.

The Energy Information Administration anticipates the net export position will grow. EIA projects net petroleum exports to average 751,000 barrels per day in 2020. The United States would be a net petroleum exporter on an annual basis for the first time.

Supply/demand data in the United States for the week ending Nov. 29, 2019, were released by the Energy Information Administration.

Refineries used 91.9 percent of capacity, up 1.6% from the previous report week.

The most recent decline in natural gas futures began on November 5th. Natural gas futures reached $2.905. It was the subject of David Thompson’s Technical Analysis Update of November 7, 2019. (If you missed David’s work, send us a note at contact@powerhousetl.com)

The technical analysis identified an island top reversal formation. The reversal is initially created by a bullish price gap. The market then stalls and eventually a bearish price gap occurs reversing most, if not all, of the previous advance in price. Powerhouse’s objectives of $2.70 and then $2.64 have been achieved.

The new gap approaches support at $2.187. The character of the gap is unclear. Nonetheless, the symmetry of price gaps at the top and now near support should not be ignored. Natural gas may be near a significant price point.