Integer DEF Awards 2017 are a Hit in San Antonio 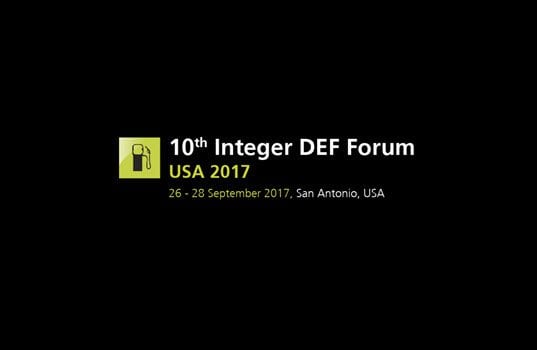 The inaugural Integer DEF Awards got off to a flying start at this year’s DEF Forum. Aiming to highlight successes and achievements throughout North America’s Diesel Exhaust Fluid (DEF) supply chain, the five hotly contested awards were presented during an evening ceremony at Integer Research’s San Antonio event.

Four of the five categories were judged by an independent panel made up of representatives from ASTM International, Clean Diesel Associates, The PEI, ACEEE, and Penske Truck Leasing. The fifth category, ‘The DEF Industry Choice Award’, was (as the name suggests) voted for by the industry.

“we received many nominations for each award and it was fantastic to see so many examples of innovation, great service and hard work. We’ve had some extremely positive feedback on the awards evening itself and we’re very excited to get planning for next year. Congratulations again to all our winners!”

Winners will be able to showcase their success with an addition to their trophy cabinets, and an official ‘DEF Award Winner’ icon to add to emails and websites.

After the awards ceremony, a charity casino event was held to raise funds for Hurricane Harvey relief. Generous guests dug deep to raise over $1200 to help those affected by the recent disaster.

It was not just the launch of The DEF Awards that set The DEF Forum 2017 apart from previous years. In response to attendee feedback, The DEF Forum was split from the Integer Emissions Summit USA, to create a stand-alone event dedicated to the DEF market. Arranged over three days, the new format actively promotes more networking, and delivers exceptional content from leaders and innovators throughout the DEF market. Feedback on this fresh approach has been extremely positive, and as a result, future Integer DEF Forums will follow suit.