The U.S. Energy Information Administration (EIA) released its weekly data on diesel and gasoline retail prices for the week ended November 2. Prices fell for both fuels. Gasoline prices fell by 3.1 cents per gallon, while diesel prices fell by 1.3 cents per gallon. Retail prices for gasoline averaged $2.112/gallon. Diesel prices averaged $2.372/gallon. The COVID-19 pandemic caused severe demand destruction. Demand has been recovering gradually, but it has not regained pre-pandemic levels, nor is it expected to this calendar year. COVID-19 infections rose alarmingly last week, with daily infections breaking past records. The U.S. stock market slid significantly last week. Today is Election Day, and markets are expected to pick up somewhat if the election results become clear without excessive delays and legal actions.

Diesel demand dropped sharply in response to COVID-19. It began to recover in fits and starts. Diesel demand stagnated at first, recovered moderately, then began to vacillate between approximately 3,000 kbpd and 3,800 kbpd. The EIA reported that distillate fuel oil demand plunged by 1,256 kbpd between the week ended March 13 and the week ended April 10, slumping from 4,013 kbpd to 2,757 kbpd in a four-week period. Demand has been cycling up and down, rising strongly to 3,958 kbpd during the week ended August 21, then retreating during the late-August and early September to bottom out at 2,809 kbpd during the week ended September 11. This was the lowest reported level since the week ended April 10, reinforcing the concern that demand will not fully recover to pre-COVID-19 levels this calendar year. Storms and wildfires are also influencing fuel use. The week ended October 23 showed diesel product supplied bouncing back to 4,240 kbpd. It is unclear how much of the ups and downs relate to the end of driving season and the start of harvest season and heating oil season. Since mid-June, gasoline and diesel demand have stagnated at approximately 90% of pre-pandemic levels. 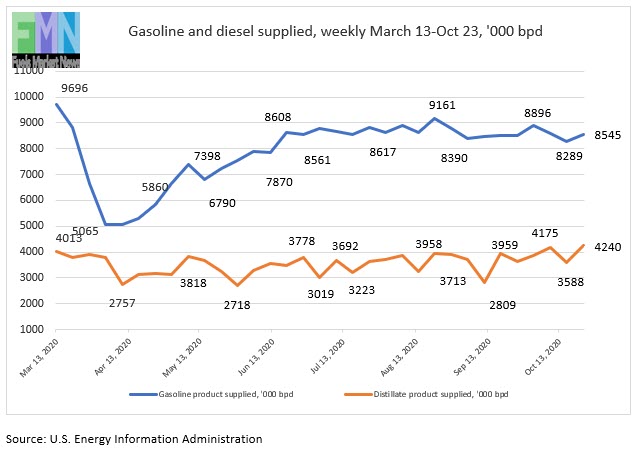 Diesel prices also had been above last year’s level, but prices are now well below these levels. On a national basis, the retail price for diesel averaged $2.372/gallon—69.0 cents/gallon lower than the price in the same week last year.

During the week October 26 to October 30, West Texas Intermediate (WTI) crude oil futures prices dropped by $3.62 per barrel (9.1%) to close the week at $35.79 a barrel—the lowest closing price in approximately five months. As of Tuesday November 3, WTI crude futures prices have recovered modestly and are back in the vicinity of $38 a barrel.

The week ended November 2 brought a 1.3 cents per gallon decrease in the retail price for diesel to reach an average price of $2.372/gallon. Prices declined PADDs 1, 2 and 3, while remaining unchanged in PADDs 4 and 5. The national average price for the week was 69.0 cents/gallon below where it was during the same week last year.

For the year to date, diesel prices have fallen by a cumulative 70.7 cents/gallon, a major downward slump. The downward trend flattened in June and July, but prices have been declining recently. Looking back to the autumn of 2019, retail diesel prices had been below the $3/gallon mark until the attacks on Saudi Arabian oil facilities in mid-September 2019. They rose at that time, and they remained above the $3/gallon mark until the week ended February 3, 2020. Prices then continued to slide.

In the Midwest PADD 2 market, retail diesel prices fell by 1.6 cents to average $2.246/gallon. Prices were 70.9 cents below their level for the same week last year. PADD 2 joined PADD 3 during the week ended June 17, 2019, in having diesel prices fall below $3/gallon. Prices subsequently fell below $3/gallon in PADD 4 and PADD 1. Finally, PADD 5 prices also slid below the $3/gallon mark.

In the Gulf Coast PADD 3, retail diesel prices fell by 1.5 cents to average $2.131/gallon. PADD 3 continues to have the lowest diesel prices among the PADDs, currently 24.1 cents below the U.S. average. Prices were 66.4 cents below their level for the same week in the previous year.

In the Rocky Mountains PADD 4 market, retail diesel prices remained unchanged at $2.324/gallon. PADD 4 prices were 84.2 cents lower than for the same week in the prior year. 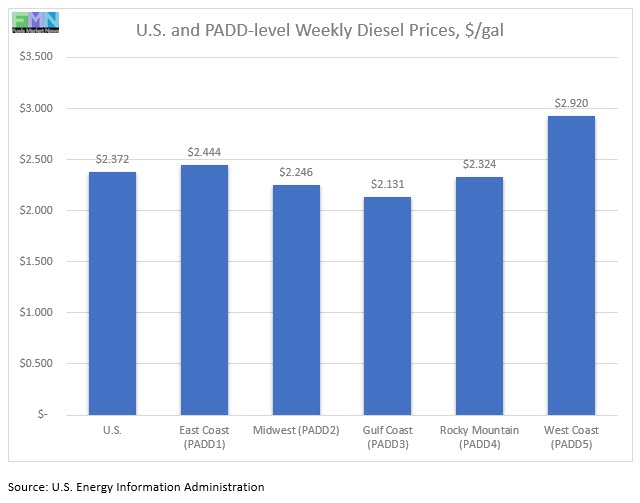 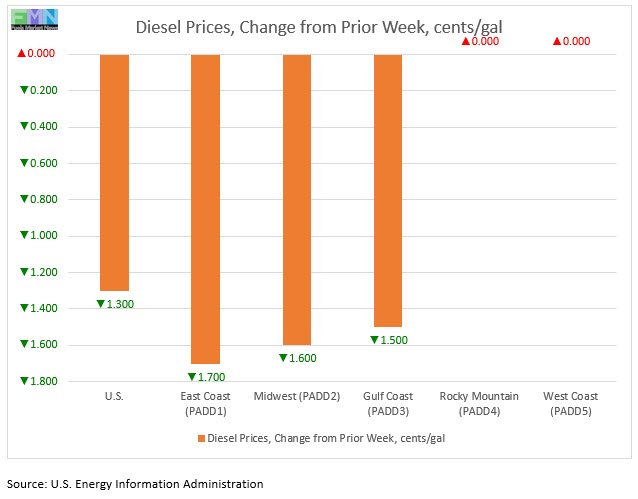 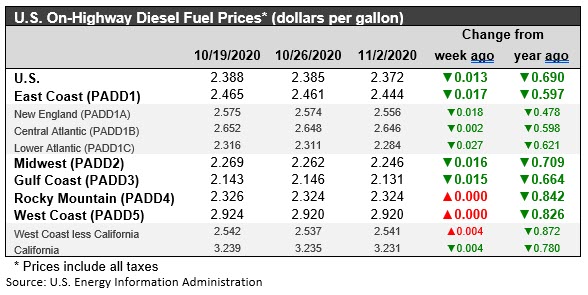 The COVID-19 pandemic continues to have a huge impact on the U.S. gasoline market. Retail prices for gasoline dropped below $2 a gallon in April, and they remained there throughout April, May, and into early June before finally climbing back to the $2/gallon level during the week ended June 8. Until the pandemic, it had been over four years since the average retail price for gasoline had been below the $2/gallon mark. With the phased re-opening of the economy, demand began to rise, as did prices. Unfortunately, so did coronavirus infections, which currently are surging. Some economic activities have been scaled back. Gasoline prices have trended down recently, falling 3.1 cents during the current week. Prices have fallen in seven of the last eight weeks.

During the current week ended November 2, average retail prices for gasoline fell by 3.1 cents to average $2.112/gallon. Prices fell in all PADDs. Retail gasoline prices for the current week were 49.3 cents per gallon lower than they were one year ago. Until November, gasoline prices had been below their levels of last year. Prices then rose to surpass last year’s levels in all PADDs. The downhill price slide changed this, making gasoline a bargain.

In the Gulf Coast PADD 3 market, gasoline prices dropped by 4.6 cents to average $1.786/gallon. This was the largest price drop among the PADDs. During the week ended March 16, PADD 3 was the first region where retail prices fell below the $2/gallon level. It was joined subsequently by PADD 2, then by PADD 1, and then by PADD 4. PADD 3 remained the only PADD with prices below $2/gallon until being joined just this past week by PADD 2. PADD 3 usually has the lowest average prices among the PADDs. PADD 3 prices for the week were 44.4 cents/gallon lower than for the same week last year.

In the West Coast PADD 5 market, retail gasoline prices fell by 1.4 cents to average $2.772/gallon. PADD 5 typically has the highest retail prices for gasoline, and until mid-March it had been the only PADD where retail gasoline prices stayed above $3/gallon. Prices this week were 83.0 cents/gallon lower than last year’s price. Prices excluding California declined by 0.9 cents to average $2.469/gallon. This was 71.5 cents/gallon below last year’s price. California prices fell by 1.8 cents during the current week to average $3.033/gallon. California had been the last state where gasoline prices had remained above the $3/gallon line, but this changed the week ended March 30. On Thursday March 19, California led the U.S. by taking the dramatic step of ordering a statewide shelter-in-place to combat the spread of COVID-19. This order affected approximately 40 million people, and it caused a dramatic contraction in fuel demand. The state began to re-open businesses and facilities in May, but COVID-19 cases rose again, and some counties backtracked reopening. California retail gasoline prices were 92.0 cents per gallon below their levels from the same week last year. 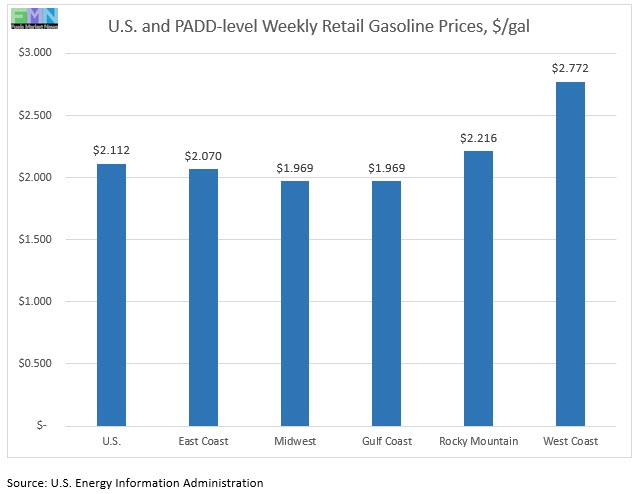 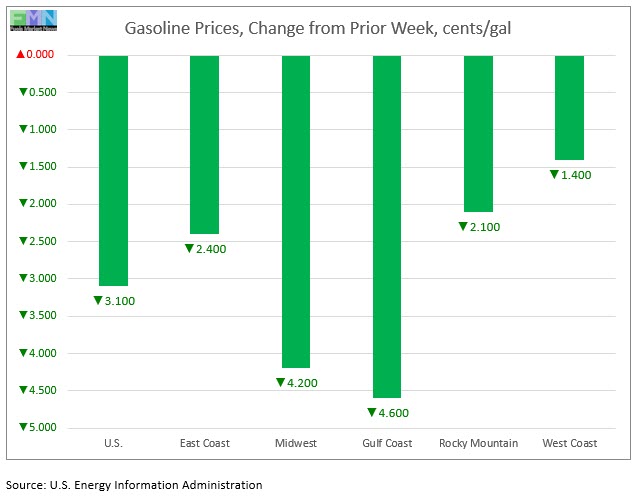 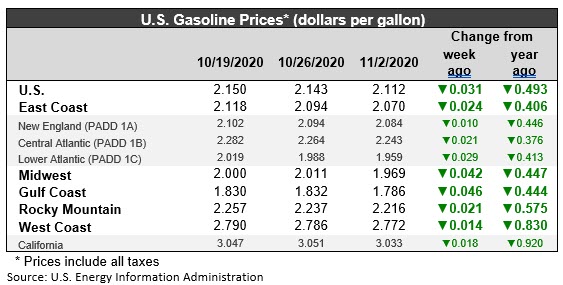 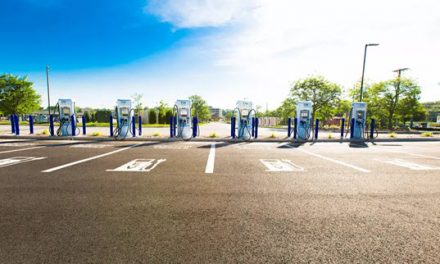 EVgo Named by GM as a Preferred Provider for EV Fleets

Bringing a Driver’s Background to the Foreground