Prices rallied again in the face of growing crude oil inventories. A theme in recent weeks continues with the U.S. continueing to produce crude oil at record levels and accumulating inventories at levels not seen for nearly a century. Nonetheless, prices are showing remarkable strength. Crude oil prices added around six dollars during the week ending April 17. Analysts are focused on a breakeven price of $65, now within sight. And if $65 is average breakeven, then there is much production profitable at lower prices.

Economics mandates open markets to be self-correcting. Much has been made of slowing production and the apparent triumph of Saudi Arabia’s plan to contain the emerging U.S. shale oil industry. As prices rise, the impetus to reduce capital spending, so widely reported, should fade. Renewed exploration/development will be reflected in production and should cap a significant further crude oil price advance.

Substantial stocks of crude oil translate into potential petroleum product supplies. This can be seen in the dramatic increase of refinery use which is now at 92.3 per cent of capacity. Spring refinery turnaround is coming to an end. This, in part, supports the rally in crude oil prices. It also foreshadows the make of added quantities of gasoline and ULSD.

Crack spreads are struggling and the recent rally in the May gasoline crack spread to $25 falls far short of its March high of $30.62. Time is running out for gasoline crack spread bulls. Powerhouse does not anticipate another significant gas crack rally this spring as new gasoline stocks meet an already well supplied market.

Supply/demand data in the United States for the week ending April 10, 2015 were released by the Energy Information Administration.

Refineries used 92.3 per cent of capacity, an increase of 2.2 percentage points from the previous week.

Propane stocks rose 2.1 million barrels. There are 60.0 million barrels in storage. Current demand is estimated at 868 thousand barrels per day, down 293,000 barrels daily from the previous report week.

The injection was larger than expectations. Analysts had anticipated additions of 53 Bcf. Nonetheless, prices rallied, challenging resistance at $2.71. The rally may have reflected shifting fundamentals. There is little reason to be bearish according to some analysts. Demand for power and the gas use that goes with it is at a seasonal low and is likely to grow with summer heat. Nuclear plant shutdowns are beginning as well.

Futures trading involves significant risk and is not suitable for everyone. Transactions in securities futures, commodity and index futures and options on future markets carry a high degree of risk. The amount of initial margin is small relative to the value of the futures contract, meaning that transactions are heavily “leveraged”. A relatively small market movement will have a proportionately larger impact on the funds you have deposited or will have to deposit: this may work against you as well as for you. You may sustain a total loss of initial margin funds and any additional funds deposited with the clearing firm to maintain your position. If the market moves against your position or margin levels are increased, you may be called upon to pay substantial additional funds on short notice to maintain your position. If you fail to comply with a request for additional funds within the time prescribed, your position may be liquidated at a loss and you will be liable for any resulting deficit. Past performance may not be indicative of future results. This is not an offer to invest in any investment program.Vol. PH 04 NO. 16 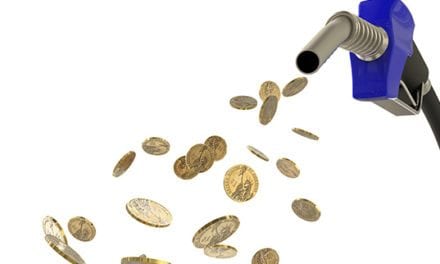 Is a Carbon Tax In our Future?