During the week June 21-July 1, 2019, West Texas Intermediate (WTI) crude futures rose by $1.96/b (3.4%.) Gasoline futures prices soared by 12.34 cents/gallon (6.9%.) Diesel futures prices rose by 6.58 cents/gallon (3.5%.) Global oil prices have been rising alongside geopolitical tensions. The loss of the PES refinery is now constraining U.S. gasoline supplies, which caused prices to rise. Although the relationship between futures market prices and retail prices is not immediate and one-for-one, the most recent trend in futures prices suggests that the recent easing of gasoline and diesel retail prices is over, and that retail prices will rise in the coming week.

In the East Coast PADD 1, diesel prices edged up by 0.1 cents to arrive at an average price of $3.080/gallon. Within PADD 1, New England prices declined by 0.1 cents to average $3.135/gallon. Central Atlantic diesel prices rose by 1.2 cents to average $3.270/gallon. Lower Atlantic prices fell by 0.5 cents to reach an average price of $2.941/gallon. PADD 1 prices were 14.6 cents/gallon below their prices for the same week last year.

In the Midwest PADD 2 market, retail diesel prices fell by 0.2 cents to average $2.924/gallon. Prices were 24.7 cents/gallon below their level for the same week last year. PADD 2 joined PADD 3 during the week ended June 17th in having diesel prices below $3/gallon.

In the Gulf Coast PADD 3, retail diesel prices rose by 0.6 cents to average $2.803/gallon. PADD 3 typically has the lowest diesel prices among the PADDs. Prices were 19.9 cents lower than for the same week in the previous year.

In the Rocky Mountains PADD 4 market, retail diesel prices dropped by 3.2 cents to settle at an average of $2.998/gallon. This was the largest price decrease among the PADDs. PADD 4 now joins PADDs 3 and 2 in having diesel prices below $3/gallon. PADD 4 prices were 36.0 cents lower than for the same week in the prior year. 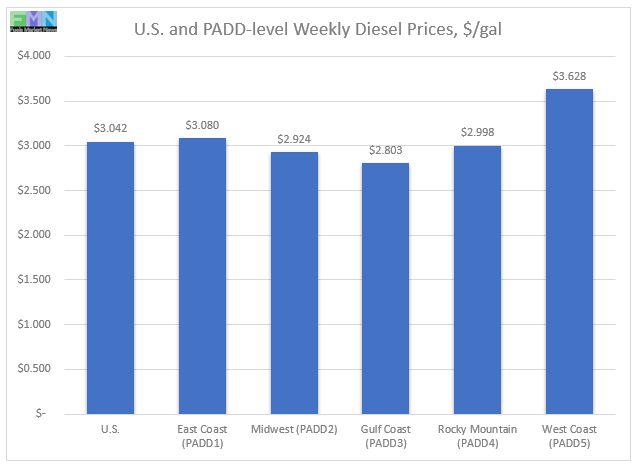 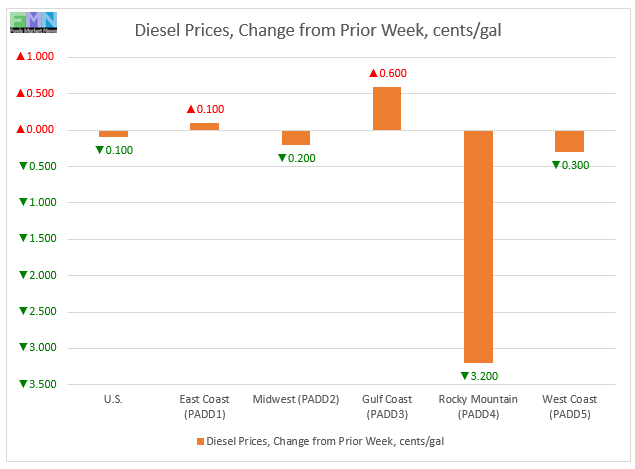 U.S. retail gasoline prices rose significantly for the first time in eight weeks, rising by 5.9 cents/gallon to an average of $2.713/gallon during the week ended July 1st. Prices rose in PADDs 1, 2 and 3, and they continued to fall in PADDs 4 and 5. Retail prices for the current week were 13.1 cents per gallon lower than they were one year ago. Gasoline prices hit a peak of $2.903/gallon during the week ended October 8, 2018. Prices then slid downward for fourteen weeks in a row, shedding a total of 66.6 cents per gallon. In the next seventeen weeks, prices marched back up by 66.0 cents/gallon. Prices came very close to the peak they hit in early October, before the months of May and the June brought an easing of prices. Gasoline prices in May and June retreated by 23.3 cents per gallon. This week ended July 1 reversed that downward trend.

The increase in retail gasoline prices outpaced the increases in crude oil prices and diesel prices mainly because of the catastrophic explosion and fire at the 335,000-bpd, gasoline-maximizing Philadelphia Energy Systems (PES) refinery. The refinery owners, already under financial pressure, announced that they would not re-open the refinery. Gasoline prices rose in PADD 1, and also in neighboring PADDs 2 and 3, which are sources of fuel supply to the East Coast.

In the Midwest PADD 2 market, retail gasoline prices rose by 6.7 cents to arrive at an average price of $2.629/gallon. PADD 2 prices for the current week were 13.3 cents/gallon lower than they were for the same week last year.

In the Gulf Coast PADD 3 market, gasoline prices increased by 6.9 cents to average $2.368/gallon. PADD 3 continues to have the lowest average prices among the PADDs. Prices for the week were 23.6 cents lower than for the same week last year.

In the Rocky Mountains PADD 4 market, gasoline pump prices fell by 4.5 cents to arrive at an average price of $2.823/gallon. This was the largest price drop among the PADDs. This week’s prices were 14.5 cents lower than at the same time last year.

In the West Coast PADD 5 market, retail gasoline prices declined by 0.3 cents to arrive at an average of $3.386/gallon. PADD 5 continues to have the highest gasoline prices among the five PADDs. Prices were 0.7 cents below last year’s level. Excluding California, West Coast prices fell by 1.9 cents to average $3.102/gallon. This price was 10.4 cents lower than at the same time last year. In California, pump prices rose by 0.8 cents to average $3.621/gallon. California prices were 7.5 cents per gallon above their levels from the same week last year. 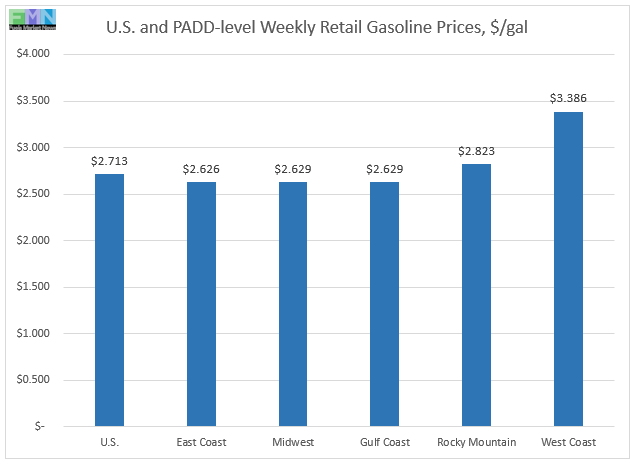 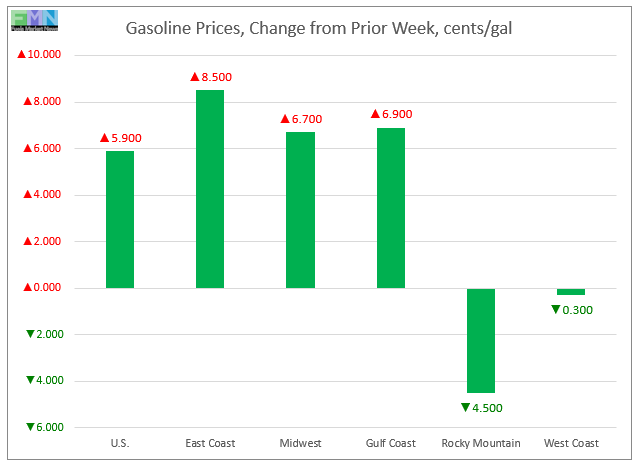 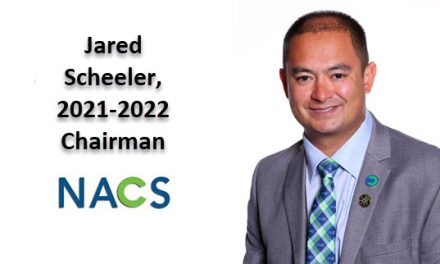 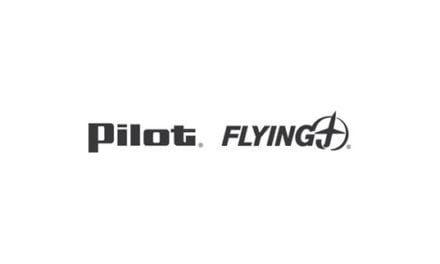