The U.S. Energy Information Administration (EIA) released its weekly data on diesel and gasoline retail prices for the week ended August 3. Overall, retail prices changed very little, though there were variations from PADD to PADD. Retail prices for gasoline edged up by 0.1 cents per gallon. Diesel prices, which have not yet shown a strong rebound, declined slightly by 0.3 cents per gallon. The COVID-19 pandemic caused severe demand destruction. This has been reversing gradually. However, the hoped-for recovery now is threatened by an alarming increase in COVID-19 infections. In some areas, economic reopening may have come too soon, and closures are being reinstituted. 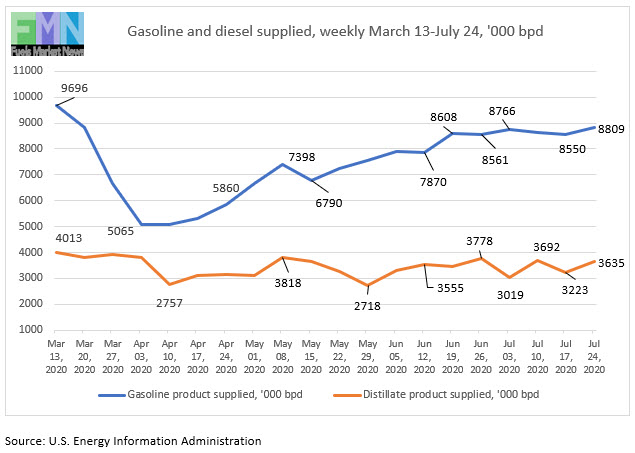 Diesel prices also had been above last year’s level, but prices are now well below these levels. On a national average basis, the retail price for diesel averaged $2.424/gallon—60.8 cents/gallon lower than the price in the same week last year. For the calendar year to date, retail prices for diesel have shed a total of 65.5 cents/gallon.

The week ended August 3 brought a 0.3 cents/gallon decrease in the retail price for diesel. For the year to date, diesel prices have fallen by a cumulative 65.5 cents/gallon, a major downward slump that now appears to be stabilizing. In the autumn of 2019, retail diesel prices had been below the $3/gallon mark until the attacks on Saudi Arabian oil facilities in mid-September 2019. They rose at that time, and they remained above the $3/gallon mark until the week ended February 3, 2020. Prices then continued to slide. For the current week, retail diesel prices fell by 0.3 cent to arrive at an average price of $2.424/gallon. Prices fell in PADDs 1, 2 and 3, while prices rose in PADDs 4 and 5. The national average price for the week was 60.8 cents/gallon below where it was during the same week last year.

In the Midwest PADD 2 market, retail diesel prices fell by 0.3 cents to average $2.298/gallon. Prices were 64.4 cents below their level for the same week last year. PADD 2 joined PADD 3 during the week ended June 17, 2019, in having diesel prices fall below $3/gallon. Prices subsequently fell below $3/gallon in PADD 4 and PADD 1. Eleven weeks ago, PADD 5 prices also slid below the $3/gallon mark.

In the Gulf Coast PADD 3, retail diesel prices fell by 0.8 cents to average $2.175/gallon. PADD 3 continues to have the lowest diesel prices among the PADDs, currently 24.9 cents below the U.S. average. Prices were 61.2 cents below their level for the same week in the previous year.

In the Rocky Mountains PADD 4 market, retail diesel prices edged up by 0.1 cent to average $2.343/gallon. PADD 4 prices were 62.2 cents lower than for the same week in the prior year. 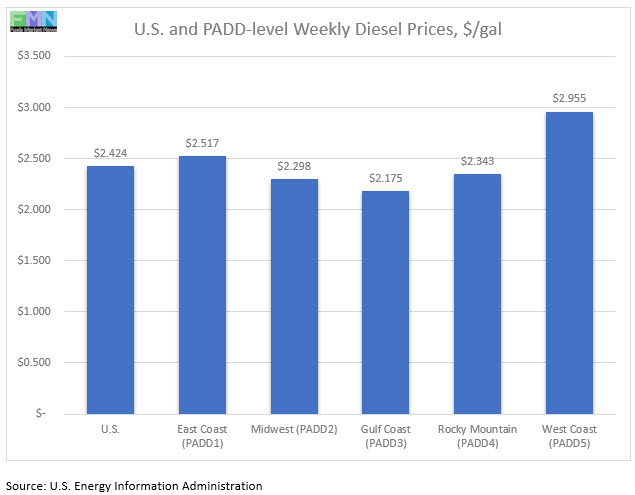 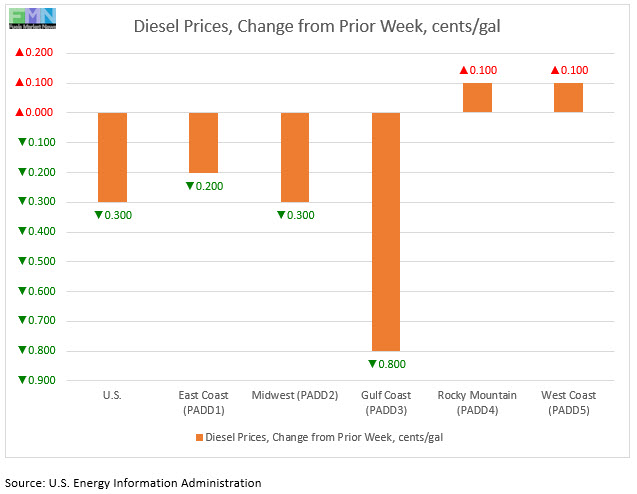 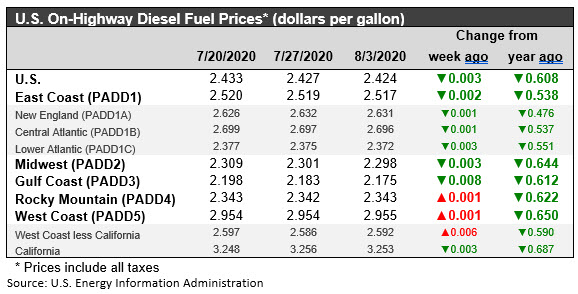 The COVID-19 pandemic is having a massive impact on the U.S. gasoline market. With the phased re-opening of the economy, demand began to rise, as did prices. However, the economic reopening has led to an alarming, sustained increase in coronavirus infections, and some states are being forced to rethink their strategies. During the week ended June 8, U.S. retail gasoline prices finally regained the $2/gallon threshold, after falling below this level during the week ended April 6 and remaining there for the next nine weeks. During the current week ended August 3, average retail prices for gasoline edged up by 0.1 cent to average $2.176/gallon. Prices fell in PADDs 2 and 3, while rising in PADDs 1, 4 and 5. Retail gasoline prices for the current week were 51.2 cents per gallon lower than they were one year ago. Until November, gasoline prices had been below their levels of last year. Prices then rose to surpass last year’s levels in all PADDs. The downhill price slide changed this, making gasoline a bargain. Until the pandemic, it had been over four years since the average retail price for gasoline had been below the $2/gallon mark.

Looking back at historic prices, gasoline prices hit a peak of $2.903/gallon during the week ended Oct. 8, 2018. Prices then slid downward for 14 weeks in a row, shedding a total of 66.6 cents per gallon. In the next 17 weeks, prices marched back up by 66 cents/gallon. Prices came very close to the peak they hit in early October 2018. However, the months of May and the June 2019 brought an easing of prices amounting to 23.3 cents per gallon. The week ended July 1 reversed that downward trend and sent prices up once again. The COVID-19 pandemic caused a price collapse, but prices began to climb back up in May, June and early July. The second half of July brought a modest easing of prices.

In the Midwest PADD 2 market, retail gasoline prices fell by 2.0 cents to average $2.055/gallon. PADD 2 prices for the week were 57.8 cents/gallon lower than they were for the same week last year.

In the Gulf Coast PADD 3 market, gasoline prices declined by 0.9 cents to average $1.847/gallon. During the week ended March 16, PADD 3 was the first region where retail prices fell below the $2/gallon level. It was joined subsequently by PADD 2, then by PADD 1, and then by PADD 4. Currently, PADD 3 remains the only PADD where prices are still below $2/gallon. PADD 3 usually has the lowest average prices among the PADDs. PADD 3 prices for the week were 53.8 cents/gallon lower than for the same week last year.

In the Rocky Mountains PADD 4 market, gasoline pump prices jumped by 4.6 cents to average $2.370/gallon. This week’s PADD 4 prices were 32.9 cents/gallon lower than at the same time last year.

In the West Coast PADD 5 market, retail gasoline prices rose by 0.8 cents to average $2.832/gallon. PADD 5 typically has the highest retail prices for gasoline, and until mid-March it had been the only PADD where retail gasoline prices stayed above $3/gallon. Prices this week were 46.0 cents/gallon lower than last year’s price. Prices excluding California increased by 0.3 cents to average $2.561/gallon, which was 43.6 cents/gallon below last year’s price. California prices regained the $3 per gallon level three weeks ago and continued to rise this week, increasing by 0.9 cents to average $3.058/gallon. California had been the last state where gasoline prices had remained above the $3/gallon line, but this changed the week ended March 30. On Thursday March 19, California led the U.S. by taking the dramatic step of ordering a statewide shelter-in-place to combat the spread of COVID-19. This order affected approximately 40 million people, and it caused a dramatic contraction in fuel demand. The state began to re-open businesses and facilities in May, but COVID-19 cases are rising again, and some counties are being ordered to backtrack reopening. Statewide, indoor dining and bars were ordered to shut down again. California retail gasoline prices were 47.9 cents per gallon below their levels from the same week last year. 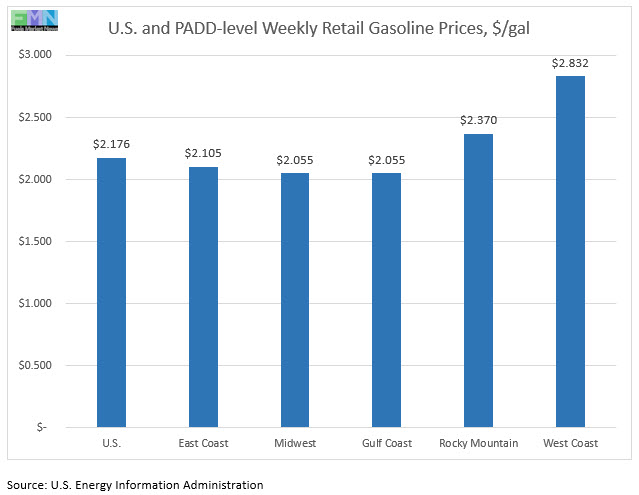 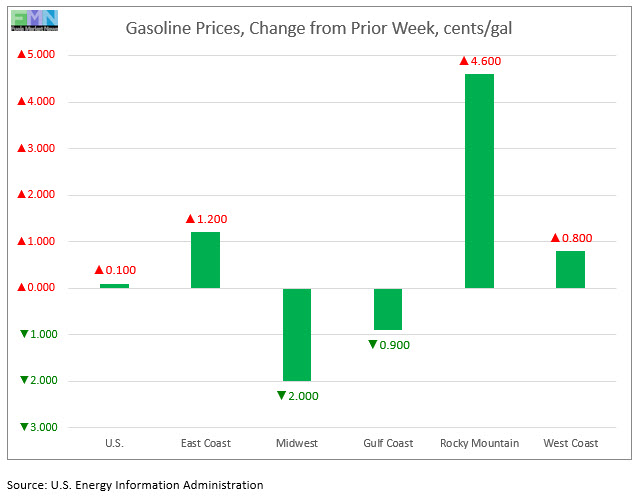 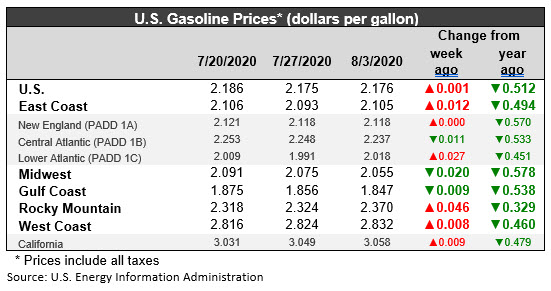 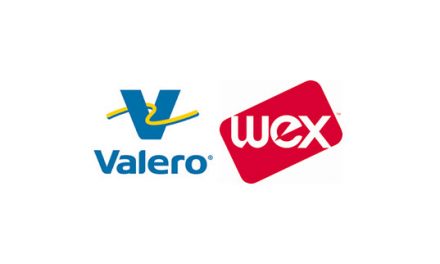 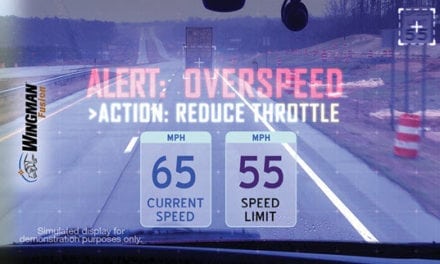 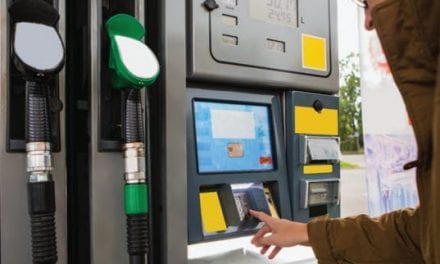 To EMV or not to EMV: The Fuel Merchant’s Question