Fueling with a Silicon Valley Twist 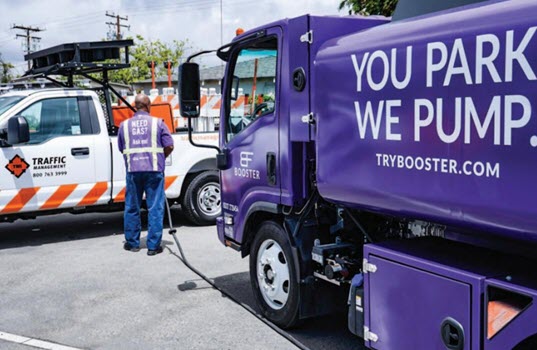 FMN took a brief look at San Mateo, California-based Booster Fuels back in 2016. The company, with a unique twist on mobile fueling, has continued to expand. Booster is a combination fuel retailer/mobile fueler/ “on demand” tech company. Half of its focus is conventional, and the other half is non-traditional, taking advantage of opportunities in denser, urban environments.

The company currently has operations in Austin, Dallas-Fort Worth, the Los Angeles Area, Nashville, Orange County, the San Francisco Bay Area and Seattle. Deliveries are provided by small, sophisticated fueling vehicles with 1,200-gallon tanks that are maneuverable in urban environments.

The first business market is aimed at light-duty commercial fleets and uses a model similar to most wet-hosing operations. The fleet vehicles are fueled during the downtime in the company’s lot.

For an example, one landscaping company using the service has close to 200 employees, 60 commercial vehicles and more than 150 pieces of landscaping equipment. They had issues tracking the fueling process and fraud concerns, in addition to the distractions from traditional retail fueling. With Booster, its fleet vehicles and gas cans are fueled before each shift.

According to Booster total fuel costs remained the same and the efficiency generated some 5,000 hours of employee time for repurposing.

The second business model had major employers such as Oracle, PayPal, Toyota and IBM partnering with Booster to offer an on-site fueling service as a value-added benefit to its employees.

The fueling process in this model is straightforward. The employee parks the car in the corporation’s lot, accesses the app and opens the fueling door before leaving the vehicle. The app identifies the vehicle and its location. During the fueling run the Booster driver fills the tanks of the appropriate cars in the lot. 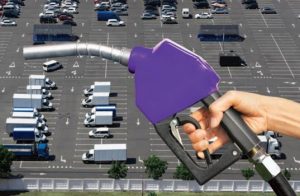 Pricing depends upon the service offering. “Booster’s business model focuses on consumer and fleet parking lots, allowing Booster to keep the efficient service free from additional fees [for the employee service],” said Tyler Raugh, a company founder who handles sales and operations. “The financial arrangement varies by location, and it is competitively priced with nearby gas stations. For fleets, Booster arranges a monthly contractual payment in addition to whatever fuel Booster delivers.”

Booster works with local fuel refineries for its supply, then delivers fuel to consumers with no intermediate storage. The company notes this helps protect from environmental concerns.

One obvious concern for those in the industry is explaining such a model to local regulators. While the service is traditional in some obvious ways, its uniqueness can raise concerns. The company noted it is eager to comply with (and even exceed) local regulatory rules regarding fuel safety.

“Before moving our business into any location, we work directly with city officials to be permitted to do what we do,” said Raugh. “Booster complies with additional local, state and federal safety rules such as the DOT, CARB, and Weights and Measures. Booster strives to build ongoing partnerships with regulators at each level of governance.”

The truck is the core component of the process. The mini-tanker carries 1,200 gallons of fuel—with a split bulkhead to deliver both gasoline and diesel—but is small enough to fit into a single parking space. At 19,000 lbs. versus 65,000 lbs., the mini-tanker’s lightweight design doesn’t tear up or damage asphalt like a larger fuel truck would, noted Raugh. It has the turning radius of a Honda Civic and a forward cab arrangement for visibility, enabling Booster drivers to safely navigate in tight parking lots. The trucks are also carbon-offset and clean-air idle-certified, meaning it emits only 30g of nitrogen oxide per hour while idle.

Raugh noted that each component and piece of equipment was carefully vetted and selected for speed, safety and innovation.

The truck’s pump dispenses fuel at up to 10 gallons per minute (gpm). It uses a TCS 3000 for metering. Additionally, there is a 10-micron Symtec filter to capture any deposits or water in the fuel. The housing is explosion-proof and made to regulatory standards to avoid any chance of sparking or starting a fire. An “Internet of Things” (IoT) antenna is connected to a computer on top of the fuel pump, which keeps track of the dispensed fuel and sends transaction and other data directly to Booster’s accounting team.

Booster’s mini-tankers are real-time cloud connected, with a fully integrated OS platform. Booster’s technology team designed their own, cloud-native, fully integrated technology platform called Optimus. Similar to how apps add competencies to phones through mobile platforms like Android and iOS, the Optimus platform allows Booster to build, deploy and scale solutions directly to its trucks. For example, a predictive maintenance app connects to the engine light and the odometer, sending data to the cloud for all of the trucks in real time. An auditing app reads data from the truck’s cash register, so that as soon as a fuel-up completes, Booster’s finance team can reconcile the transaction.

The human element is equally important. Not only do Booster drivers have CDL C, B or A (Commercial Driver’s License), they are also certified to transport fuel with both a Tanker Endorsement and a Hazmat Endorsement. Drivers also receive intensive training from Booster as well as a short apprenticeship with an experienced Booster driver before they start making deliveries.