Is There a Bottom in Distillate Fuel Oil Prices? 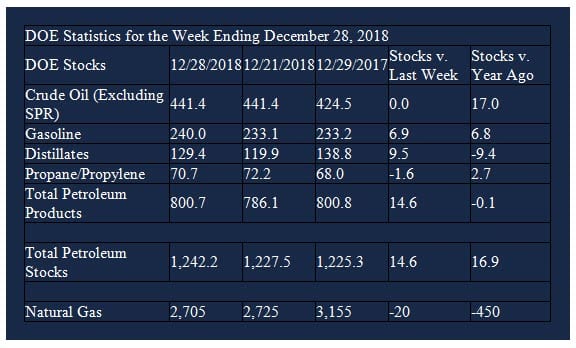 Petroleum futures market price action does not always conform to expectations. And sometimes, expectations themselves can generate mixed ideas of where prices might go. The Ultra-Low Sulfur Diesel (ULSD) futures contract offers a good example of this complexity.

Diesel prices have typically reached their lows early in the year, a time when many dealers seek to establish futures positions for the year.  The average annual low was set during winter in the ten years from 2009 through 2018. This included the months of December through February. The ULSD Index chart shown below shows how much variation exists between weekly NYMEX ULSD futures prices and the average NYMEX ULSD futures price. These data are shown as percentages. 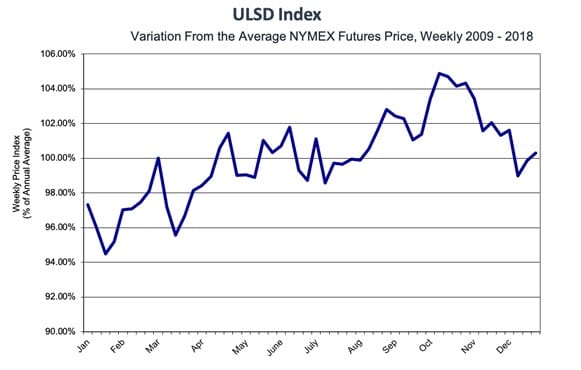 Not surprisingly, the greatest downside variation occurs in January. This is consistent with history and supports the idea that ULSD prices bottom at this time.

Another indicator of a possible bottom in ULSD prices may be found in Open Interest. Open interest measures the number of working futures contracts. And if open interest rises while prices are rising, traders see a bullish situation. (Rising open interest in a rising market means that bulls are adding in to profitable positions.) As 2018 ended, Open Interest of ULSD contracts was 367,000. A mere three days later, open interest added more than 9,000 contracts. Prices rose more than six cents. (On Friday, January 04, 2019, prices added yet another three-and-one-half cents.)

This rally occurred in the face of remarkably bearish inventory for the week ending December 28, 2018. Petroleum stocks added 14.6 million barrels to supply. Notably, gasoline stocks rose 6.9 million barrels and distillate fuel oil inventories added 9.5 million barrels. In part this reflected reduced exports of 1.2 million barrels across both crude oil and products. This has all occurred during the year-end holiday period and will likely adjust in the next several days.

One ignores these signs at their peril.

Supply/demand data in the United States for the week ending December 28, 2018 were released by the Energy Information Administration.

There were builds in stocks of gasoline, K-jet fuel, distillates, and residual fuel. There were draws in stocks of propane and other oils. Stocks of fuel ethanol were unchanged from the previous report week.

Commercial crude oil supplies in the United States was unchanged from the previous report week at 441.4 million barrels.

Domestic crude oil production was unchanged from the previous report week at 11.7 million barrels per day.

Refineries used 95.1 per cent of capacity, a decrease of 0.3 percentage points from the previous report week.

Working gas in storage was 2,705 Bcf as of Friday, December 28, 2018, according to EIA estimates. This represents a net decrease of 20 Bcf from the previous week. Stocks were 450 Bcf less than last year at this time and 560 Bcf below the five-year average of 3,265 Bcf. At 2,705 Bcf, total working gas is below the five-year historical range.

Natural gas prices reacted bearishly to these data. Technical analysts place support around $2.79. Break of this level opens the way to around $2.50. 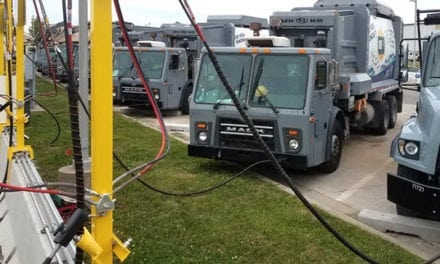