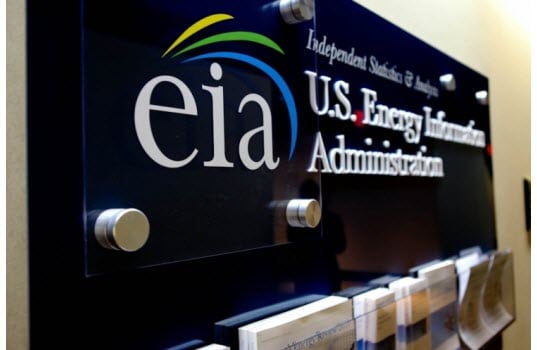 Excerpted from This Week in Petroleum, August 28, 2019

The U.S. average retail price for all formulations of regular gasoline on August 26, 2019, was $2.57 per gallon (gal), 25 cents/gal (9%) lower than the price at the same time last year (Figure 1). This decline in the price of gasoline has been driven by lower North Sea Brent crude oil prices (a global benchmark for crude oil and the most relevant determinant of U.S. gasoline prices), drops in year-over-year demand, and high gasoline inventory levels. 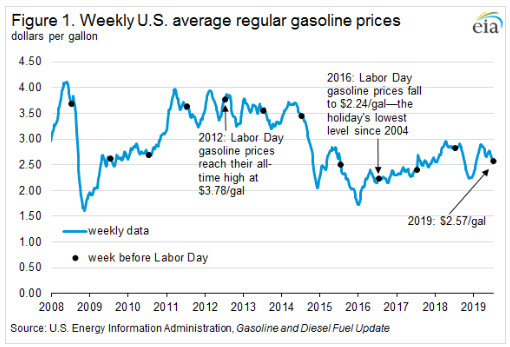 The price of crude oil remains the single most significant contributor to the price of gasoline. The U.S. Energy Information Administration (EIA) estimated that in July 2019, the price of crude oil accounted for 52% of the average U.S. retail price of regular gasoline, followed by taxes (18%), refining costs (16%), and distribution and marketing expenses (14%). Unlike taxes and the expenses associated with distribution and marketing, crude oil prices and refining costs tend to be relatively volatile and typically are responsible for most of the changes in gasoline prices. Because a barrel of crude oil contains 42 gallons, each dollar per barrel of sustained price change in crude oil translates to an average change of about 2.4 cents/gal in petroleum product prices. The price of Brent crude oil fell 17% from $69.82 per barrel (b) on August 27, 2018, to $58.25/b on August 26, 2019, contributing to lower gasoline prices compared with 2018.

The week leading into Labor Day is typically one of the busiest driving periods of the year during the already-busy summer driving season (April through September). According to data from the Federal Highway Administration (FHWA), U.S. drivers drove 1.6 trillion miles between January and June 2019—1.1% more than the equivalent period in 2018. In the August update of its Short-Term Energy Outlook, EIA forecasts that U.S. drivers will drive 3.3 trillion miles in 2019, making 2019 the busiest year for automotive travel since at least 1970, according to data from the FHWA. Despite the increase in miles traveled, year-to-date product supplied—a proxy for consumption—of finished motor gasoline is slightly lower (-0.1%) compared with product supplied during the same period last year, likely driven by an expected 1.0% increase in fleet-wide vehicle fuel efficiency. 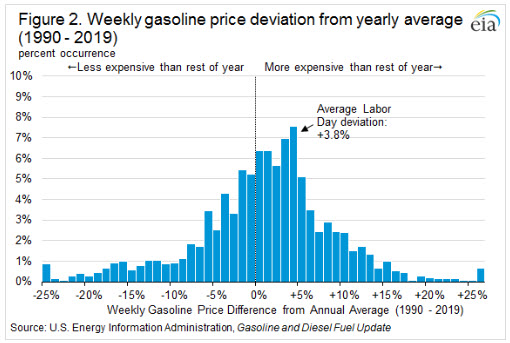 U.S. gasoline prices vary regionally, reflecting local supply and demand conditions, different fuel specifications required by state laws, and taxes. Regional gasoline prices are usually the highest in the West Coast Petroleum Administration for Defense District (PADD), owing to the region’s limited interconnections with other major refining centers (including the Gulf Coast), tight local supply and demand conditions, and requirements for gasoline specifications that are more costly to manufacture. As a result, West Coast gasoline prices between January 1 and August 26 averaged $1.12/gal higher than prices on the Gulf Coast, which typically has the country’s lowest prices. The Gulf Coast contained 53% of the country’s total refining capacity as of January 2019, and it produces more gasoline than it consumes. As of August 26, gasoline prices in the Gulf Coast averaged $2.26/gal, 31 cents lower than the national average. Gasoline prices in the East Coast, Midwest, and Rocky Mountain regions on August 26, 2019, averaged $0.22/gal, $0.23/gal, and $0.39/gal higher, respectively, than Gulf Coast prices (Figure 3). 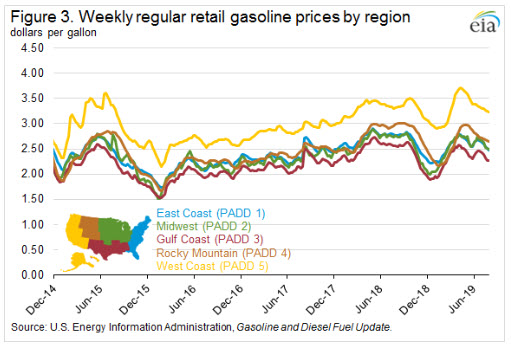 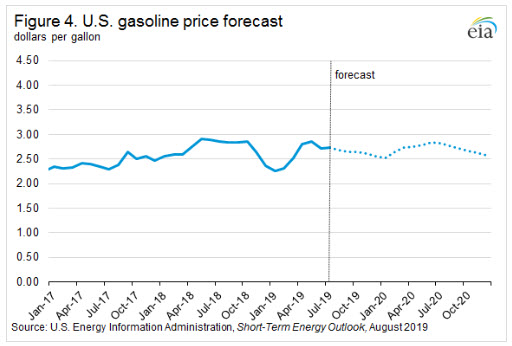 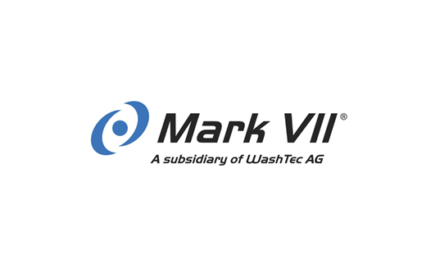 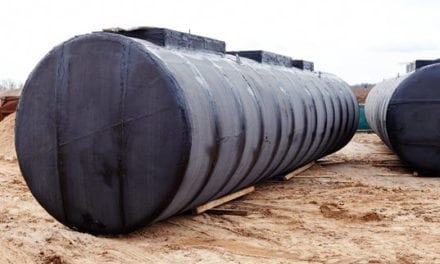 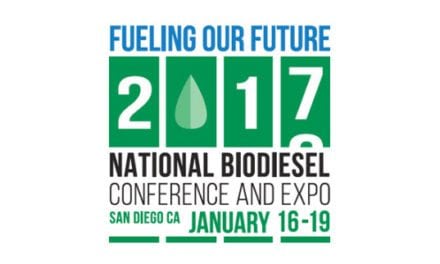