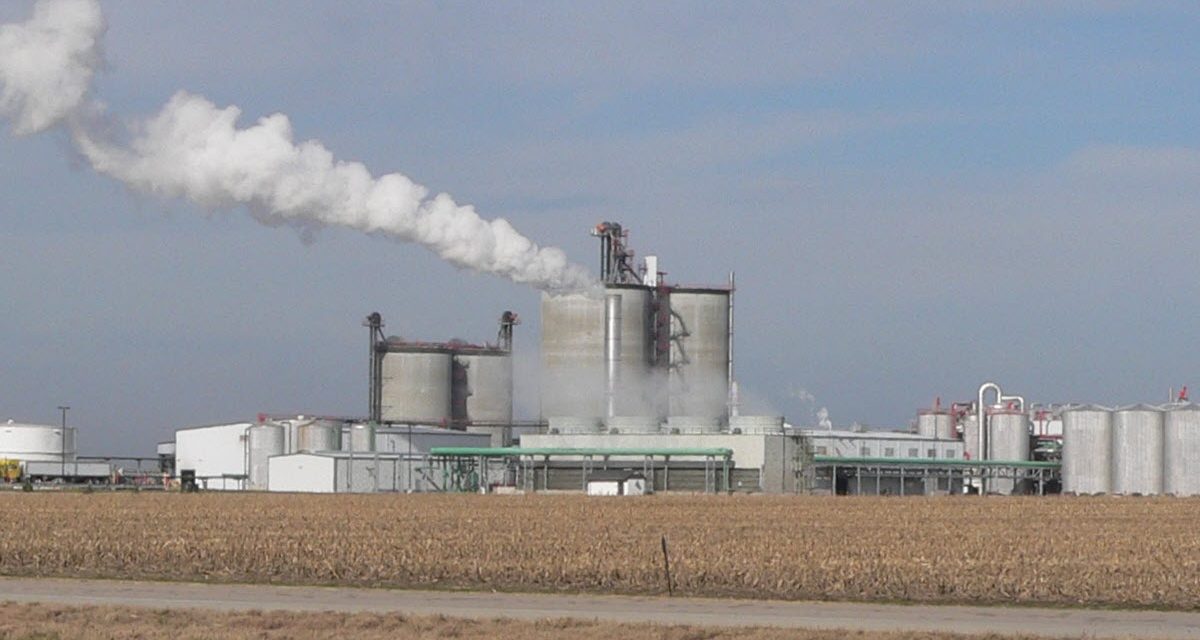 In the summer of 2022 (June—August), the price of fuel ethanol was lower than the price of the petroleum component of gasoline, which led to record-high fuel ethanol levels (blend rates) in gasoline sold in the United States. In addition, on April 29, 2022, the U.S. Environmental Protection Agency (EPA) issued an emergency fuel waiver to allow E15 gasoline, which is a gasoline blend of 15% fuel ethanol, to be sold during the summer driving season in all regions of the United States. Without the waiver, E15 cannot be sold during the summer at retail stations in areas that do not have a reformulated gasoline (RFG) program—which is about two-thirds of the country. 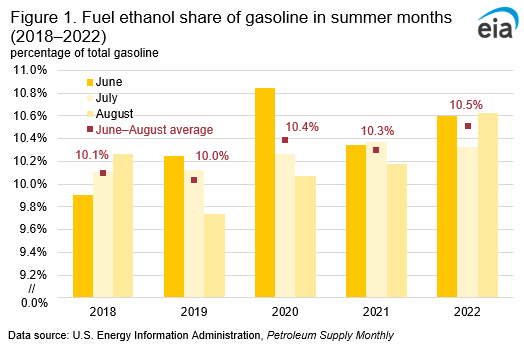 Fuel ethanol’s price discount to gasoline was one factor that led to the higher summer blend rate in 2022. Although ethanol prices have been high in 2022, they have been low relative to gasoline prices, which were at their highest since 2014 this summer because of low domestic inventories and constraints on refining capacity. When factoring in the renewable identification number (RIN) credit for blending ethanol with gasoline, ethanol’s discount to gasoline has been especially strong. RINs are the compliance mechanism used for the Renewable Fuel Standard (RFS) program administered by the EPA, and RINs have sold at near-record prices for much of 2022. Between June and August, on the U.S. Gulf Coast, ethanol’s discount to spot gasoline averaged $2.16 per gallon (gal) when factoring in the RIN credit. Ethanol’s discount to gasoline on the U.S. Gulf Coast reached as high as $3.11/gal on June 8 and has been over $1.00/gal all year (Figure 2). Although ethanol has a lower fuel efficiency than gasoline, the price discounts have been sufficiently high to make fuel ethanol less expensive on a per-mile basis. These high discounts to gasoline have likely made gasoline blends with higher percentages of ethanol, such as E85, more attractive to consumers that want to take advantage of lower prices. 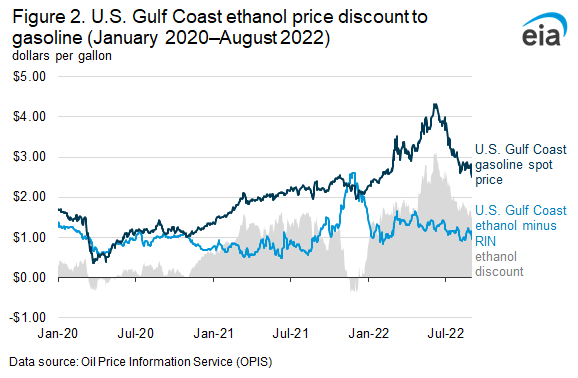 Fuel ethanol discounts likely boosted summer blend rates by contributing to more sales of both E15 and E85. Although we do not collect data on E85 sales, we do collect data on production of E85 (greater than Ed55) conventional gasoline from large facilities, which are facilities that either have shell storage capacity of at least 50,000 barrels or receive petroleum products by tanker, barge, or pipeline. We also collect data on conventional finished gasoline produced at biofuel plants (which we understand to be E85) that we add to the volumes produced at large facilities to give a more accurate accounting of total E85 production. Although our data leave out some E85 produced with reformulated gasoline and E85 produced by small facilities, our data illustrate E85 consumption trends. From June–August 2022, U.S. production of E85 conventional gasoline was at record levels, averaging 21,000 b/d over those three months (Figure 3). In comparison, conventional E85 production averaged 15,000 b/d from June–August 2021 and was generally lower in all prior months. 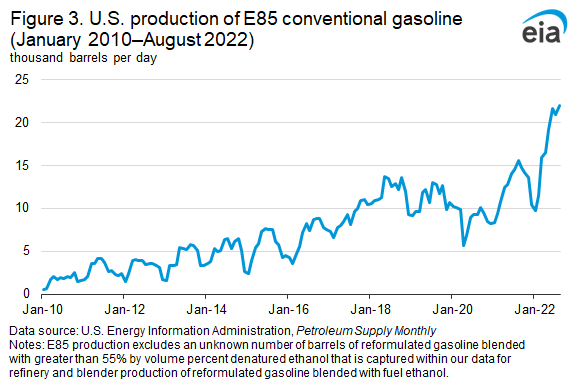 E85 production has been increasing this year, despite reduced motor gasoline consumption (Figure 4). Because nearly all of the gasoline consumed in the United States is E10, less E10 has been consumed than any year from 2015 to 2019. Less E10 consumption and more E85 production suggests that at least some consumers with flex-fuel vehicles, which are vehicles that can use both E10 and E85, opted for E85 more often this summer than in the past. The summer’s high blend rate reflects this trend, which is mostly a result of E85 selling at significantly lower prices than E10. In addition, E85 is becoming increasingly available. According to the U.S. Department of Energy’s Alternative Fuels Data Center, the United States had 4,331 E85 fueling stations as of January 2022, a 10% increase (385 stations) from the prior year. Similarly, according to biofuels trade association Growth Energy data, the number of U.S. retail gasoline stations offering E15 gasoline has increased every year since 2011— 2,686 retail stations in the United States offered E15 as of July 2022, which is 81 stations more than in 2021. Although we do not have E15 sales or production data, calculations based on the summer blend rate, E85 production, motor gasoline consumption, and fuel ethanol blended into motor gasoline suggest that E15 sales increased this summer during the emergency fuel waiver. 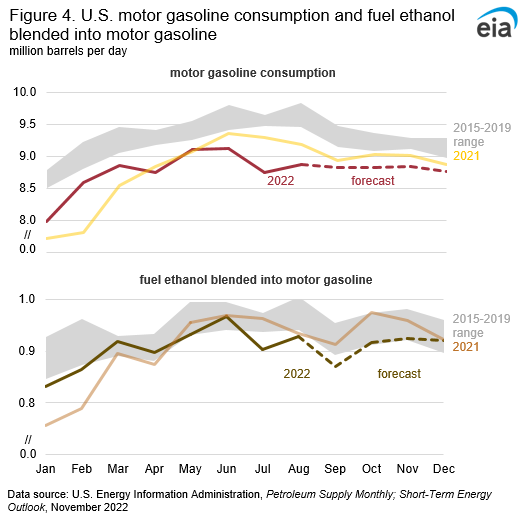 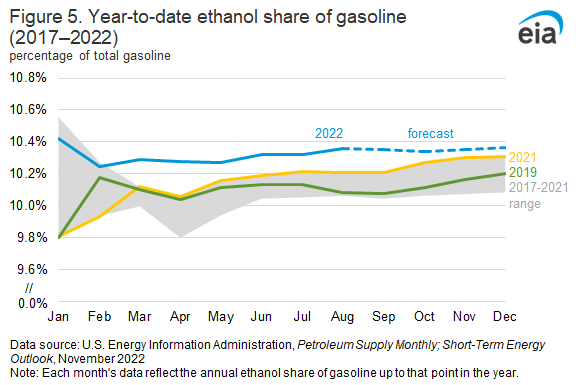 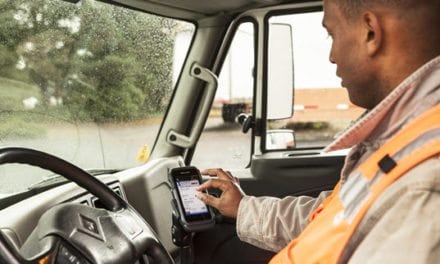 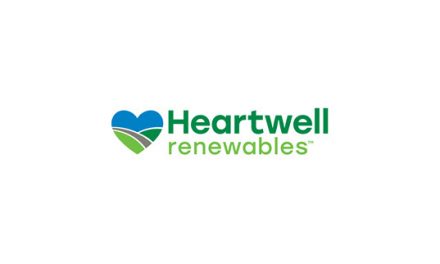