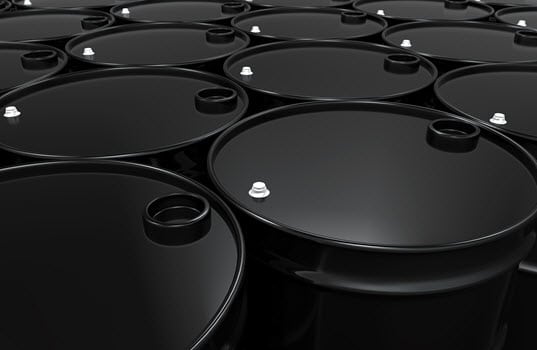 As domestic production continues to increase, the average density of crude oil produced in the United States continues to become lighter. The average API gravity—a measure of a crude oil’s density where higher numbers mean lower density—of U.S. crude oil increased in 2017 and through the first six months of 2018. Crude oil production with an API gravity greater than 40 degrees grew by 310,000 barrels per day (b/d) to more than 4.6 million b/d in 2017. This increase represents 53% of total Lower 48 production in 2017, an increase from 50% in 2015, the earliest year for which EIA has oil production data by API gravity.

API gravity is measured as the inverse of the density of a petroleum liquid relative to water. The higher the API gravity, the lower the density of the petroleum liquid, meaning lighter oils have higher API gravities. The increase in light crude oil production is the result of the growth in crude oil production from tight formations enabled by improvements in horizontal drilling and hydraulic fracturing.

Along with sulfur content, API gravity determines the type of processing needed to refine crude oil into fuel and other petroleum products, all of which factor into refineries’ profits. Overall U.S. refining capacity is geared toward a diverse range of crude oil inputs, so it can be uneconomic to run some refineries solely on light crude oil. Conversely, it is impossible to run some refineries on heavy crude oil without producing significant quantities of low-valued heavy products such as residual fuel. 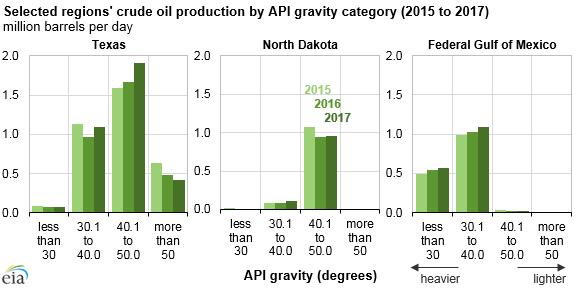 API gravity can differ greatly by production area. For example, oil produced in Texas—the largest crude oil-producing state—has a relatively broad distribution of API gravities with most production ranging from 30 to 50 degrees API. However, crude oil with API gravity of 40 to 50 degrees accounted for the largest share of Texas production, at 55%, in 2017. This category was also the fastest growing, reaching 1.9 million b/d, driven by increasing production in the tight oil plays of the Permian and Eagle Ford.