The U.S. Energy Information Administration (EIA) released its weekly data on diesel and gasoline retail prices for the week ended May 18, 2020. Retail prices for gasoline rose for the third consecutive week, after a nine-week downward spiral. Diesel prices continued to weaken. The COVID-19 pandemic caused severe demand destruction, which only recently is beginning to recover, and it appears that gasoline demand is recovering more swiftly than diesel demand. The EIA publishes weekly “product supplied” data as its proxy for demand, and the latest weekly data show that gasoline demand crashed from 9,696 thousand barrels per day (kbpd) during the week ended March 13 to just 5,065 kbpd during the week ended April 3, a huge hit of 4,631 kbpd in just four weeks. That was the low point, and the data for the week ended May 8 report that gasoline demand has crept back up to 7,398 kbpd. The EIA points out that these numbers are not a precise measure of demand. Still, it is noteworthy that apparent gasoline demand rose for the latest four weeks for which data has been reported. 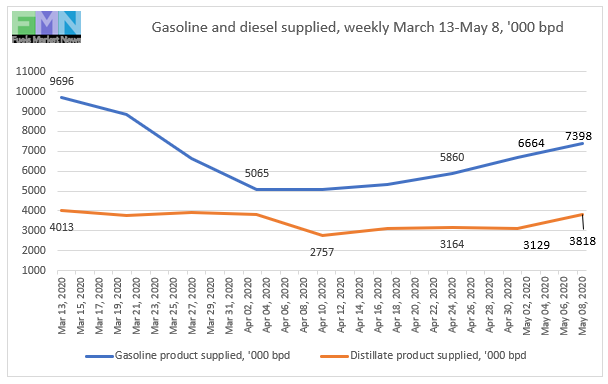 The national average price for gasoline was $1.878/gallon. This price was $0.974/gallon below the price for the same week one year ago. In February, just two months ago, retail prices for gasoline were higher than they had been a year earlier. Now, prices in four of the five PADDs are below the $2/gallon level, with only the West Coast PADD 5 having retail prices above $2/gallon. From late-November through early March, gasoline prices had been above their levels from last year. Prices declined until, during the week ended March 2, retail gasoline prices were a mere 0.001 cent/gallon above last year’s level. The huge price declines since then have brought gasoline prices dramatically below their levels of last year.

Diesel prices also had been above last year’s level, but prices are now well below their levels of last year. On a national average basis, the retail price for diesel averaged $2.386/gallon. This was 77.7 cents/gallon lower than the price in the same week last year. Retail prices for diesel have now fallen for nineteen consecutive weeks, shedding a total of 69.3 cents/gallon.

During the week May 11, 2020, to May 15, 2020, West Texas Intermediate (WTI) crude oil futures prices recovered significantly by $4.29/b (18.4%). This was the third week of price recovery following a general downward trend punctuated with sharp collapses. This included the historical event of seeing WTI crude futures for May delivery close at -$37.63/b on April 20, 2020. Infrastructure limitations and loss of liquidity had caused a collapse of never-before-seen proportions, where traders were forced to pay others to accept their contracts. During this collapse, June delivery contracts had remained in the $20-$22/b range, allowing many to conclude that this was closer to the “true” value of WTI crude. Crude futures prices soon regained this level. Currently, WTI prices are rising, approaching the $33/b level, which is prompting the question: are oil prices rising too much, too soon? The month of May is beginning with partial re-opening of economic activities, plus additional production cuts. The medical community is concerned about increased outbreaks of the coronavirus where re-opening is not done with proper care. Yet hopes are being boosted by encouraging test results on a coronavirus vaccine by biotechnology company Moderna. The public appears eager to grip positive news, feeding into the oil price rally.

Retail prices for diesel have now fallen for nineteen consecutive weeks—every week this calendar year since the first week of January. Prices have fallen by a cumulative 69.3 cents/gallon. In the autumn of 2019, retail diesel prices had been below the $3/gallon mark until the attacks on Saudi Arabian oil facilities in mid-September 2019. They rose at that time, and they remained above the $3/gallon mark until the week ended Feb. 3, 2020. Prices have continued to slide. For the current week ended May 18, retail diesel prices declined modestly by 0.8 cents to settle at an average price of $2.386/gallon. For the current week ended May 18, diesel prices fell in all PADDs. The national average price for the week was 77.7 cents/gallon below where it was during the same week last year.

In the East Coast PADD 1, diesel prices fell by 0.7 cents to settle at an average price of $2.491/gallon. Within PADD 1, New England prices declined by 1.0 cent to average $2.620/gallon. Central Atlantic diesel prices fell by 1.3 cents to average $2.667/gallon. Lower Atlantic prices edged down by 0.3 cents to an average price of $2.345/gallon. PADD 1 prices were 68.5 cents/gallon below their levels for the same week last year.

In the Gulf Coast PADD 3, retail diesel prices declined fractionally by 0.3 cents to arrive at an average of $2.175/gallon. PADD 3 continues to have the lowest diesel prices among the PADDs, currently 21.1 cents below the U.S. average. Prices were 73.2 cents below their level for the same week in the previous year.

In the Rocky Mountains PADD 4 market, retail diesel prices fell by 0.8 cents to settle at an average of $2.338/gallon. PADD 4 prices were 85.4 cents lower than for the same week in the prior year. 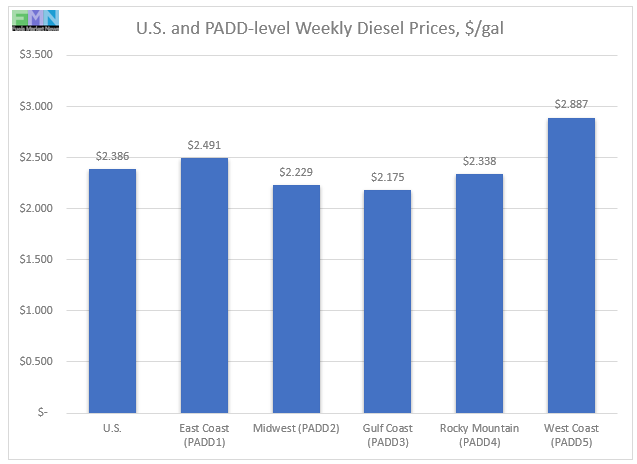 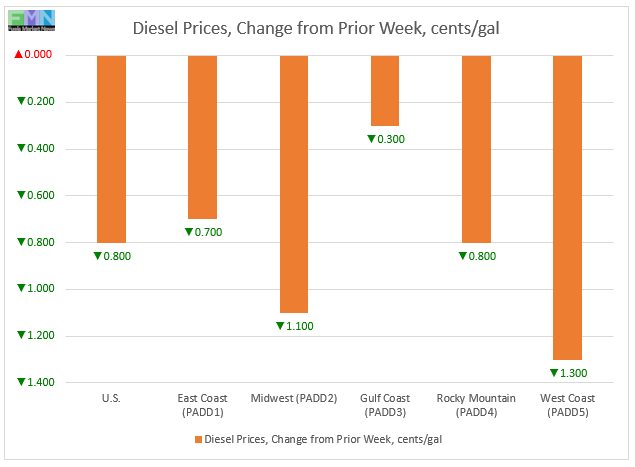 The COVID-19 pandemic is having a massive impact on the U.S. gasoline market. U.S. retail gasoline prices fell below the $2/gallon threshold during the week ended April 6, and they have remained below $2/gallon for five weeks despite the small increases over the past three weeks. Average retail prices increased by 2.7 cents/gallon to average $1.878/gallon during the week ended May 18. Prices rose in all PADDs. Retail gasoline prices for the current week were $0.974 cents per gallon lower than they were one year ago. Until November, gasoline prices had been below their levels of last year. Prices then rose to surpass last year’s levels in all PADDs. The current downhill price slide has changed this, making gasoline a bargain. It has been over four years since the average retail price for gasoline was below the $2/gallon mark.

Gasoline prices hit a peak of $2.903/gallon during the week ended October 8, 2018. Prices then slid downward for fourteen weeks in a row, shedding a total of 66.6 cents per gallon. In the next seventeen weeks, prices marched back up by 66.0 cents/gallon. Prices came very close to the peak they hit in early October. However, the months of May and the June 2019 brought an easing of prices amounting to 23.3 cents per gallon. The week ended July 1 reversed that downward trend and sent prices up once again. The COVID-19 pandemic is causing a severe contraction in demand as people shelter in place, and many jobs have been lost. The Bureau of Labor Statistics recently reported that the U.S. unemployment rate surged to 14.7% in April. According to EIA data, gasoline demand during the week ended May 8 was approximately 24% lower than it had been during the week ended March 13.

For the current week ended May 18th, East Coast PADD 1 gasoline retail prices rose by 1.8 cents to arrive at an average of $1.833/gallon. Seven weeks ago, PADD 1 joined PADDs 2 and 3 in having retail prices drop below the $2/gallon line. The average price was 89.0 cents/gallon below where it was during the same week last year. Within PADD 1, New England prices increased by 1.4 cents to average $1.878/gallon. Central Atlantic market prices rose by 3.0 cents, reaching an average of $2.037/gallon. Prices in the Lower Atlantic market rose by 1.3 cents to average $1.692/gallon.

In the Midwest PADD 2 market, retail gasoline prices rose by 3.2 cents to average $1.783/gallon. The past three weeks have brought PADD 2 prices back above prices in the U.S. Gulf Coast PADD 3 market. PADD 2 prices for the week were $0.959/gallon lower than they were for the same week last year.

In the Gulf Coast PADD 3 market, gasoline prices rose by 4.0 cents to average $1.541/gallon. Nine weeks ago, PADD 3 was the first to fall below the $2/gallon level, joined by PADD 2, then by PADD 1, and then by PADD 4. PADD 3 usually has the lowest average prices among the PADDs. PADD 3 prices for the week were $0.976/gallon lower than for the same week last year.

In the Rocky Mountains PADD 4 market, gasoline pump prices rose by 5.6 cents, reaching at an average price of $1.820/gallon. This was the largest price hike among the PADDs. This week’s PADD 4 prices were $1.162/gallon lower than at the same time last year.

In the West Coast PADD 5 market, retail gasoline prices rose by 2.7 cents to average $2.479/gallon. PADD 5 typically has the highest retail prices for gasoline, and until mid-March it had been the only PADD where retail gasoline prices stayed above $3/gallon. Prices this week were a hefty $1.188/gallon lower than last year’s price. Prices excluding California rose by 1.3 cents to average $2.229/gallon, which was $1.116/gallon below last year’s price. California prices recovered by 3.8 cents to average $2.688/gallon. California had been the last state where gasoline prices had remained above the $3/gallon line, but this changed the week ended March 30. On Thursday March 19, California led the U.S. by taking the dramatic step of ordering a statewide shelter-in-place to combat the spread of COVID-19. This order affected approximately 40 million people, and it is causing a dramatic drop in gasoline demand, as well as demand for other fuels including jet fuel and diesel. California retail gasoline prices were a massive $1.246 per gallon below their levels from the same week last year. 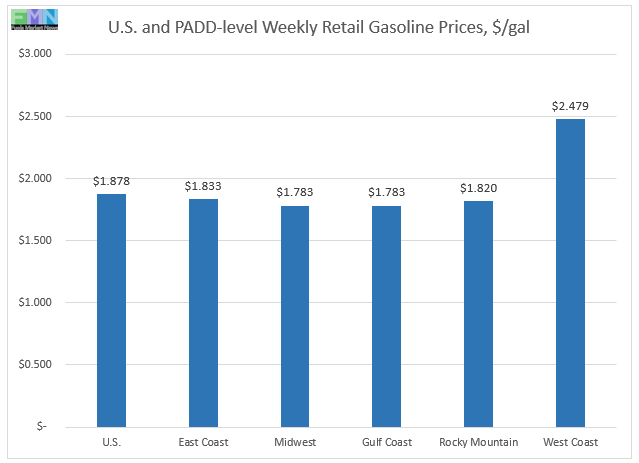 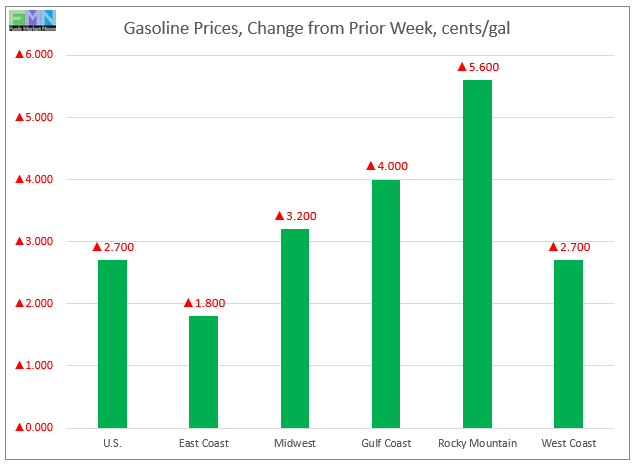 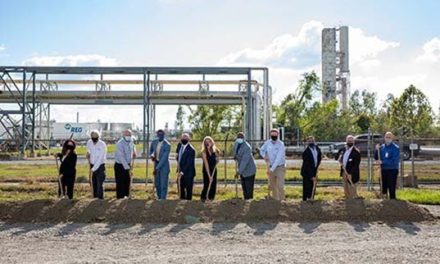 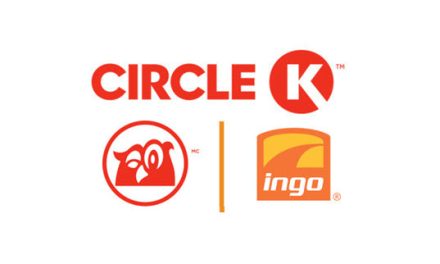