The Energy Information Administration (EIA) released its weekly data on diesel and gasoline retail prices for the week ended March 5, 2018. At the national level, gasoline prices rose by 1.2 cents per gallon, reversing last week’s decline. Diesel prices dropped by 1.5 cents per gallon. Gasoline prices rose in all PADDs except for the Rocky Mountains PADD 4. Diesel prices fell in all PADDs countrywide.

Crude prices dropped sharply in early February, recouped much of the loss by the second half of the month, and waned again over the week ended March 2. Prices have been moderated by increasing output from the US. During the four weeks of February, US crude production has exceeded 10.2 million barrels per day, setting new records. As of the time of this writing, WTI crude prices have strengthened to $62-$63/b, largely based on an expectation of continued inventory drawdowns at Cushing. In the longer term, however, opinion is divided on whether the increase in US and other non-OPEC output will fully offset the OPEC production cuts and increase in global demand.

For the current week ended March 5, diesel prices fell by 1.5 cents to arrive at an average price of $2.992 gallon. Until this past week, US national average retail diesel prices had exceeded $3/gallon for seven consecutive weeks.

In the Midwest PADD 2 market, retail diesel prices fell by 2.7 cents to average $2.920/gallon. Prices were 41.8 cents/gallon above their level for the same week last year.

In the Gulf Coast PADD 3, retail diesel prices decreased by 0.4 cents to average $2.793/gallon. This price was 36.4 cents higher than for the same week in the previous year.

In the Rocky Mountains PADD 4 market, retail diesel prices declined by 2.6 cents to average $2.910/gallon. PADD 4 prices were 28.5 cents higher than in the prior year.

In the West Coast PADD 5 market, retail diesel prices decreased by 0.5 cents to average $3.392/gallon. This price was 51.5 cents above its level from last year. Prices excluding California were unchanged at $3.064/gallon, which was 28.5 cents above the retail price for the same week last year. California diesel prices fell by 0.8 cents to an average price of $3.652/gallon. This price was 69.6 cents higher than last year’s price. Until January, PADD 5 had been the only PADD to have diesel prices above $3 per gallon. Prices around the country climbed until the national retail average exceeded the $3/gallon mark as of the week ended January 15. Prices subsided when crude oil prices fell, and this week’s average retail price is $2.992/gallon. Markets now are watching crude prices to judge whether the downward correction is over, and whether this will halt the downward trend in refined fuel prices. 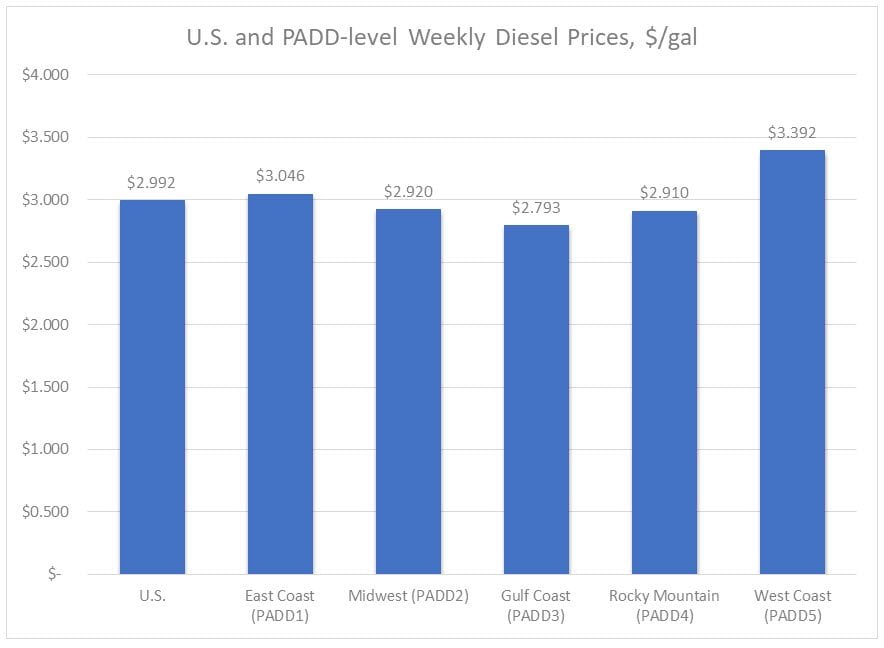 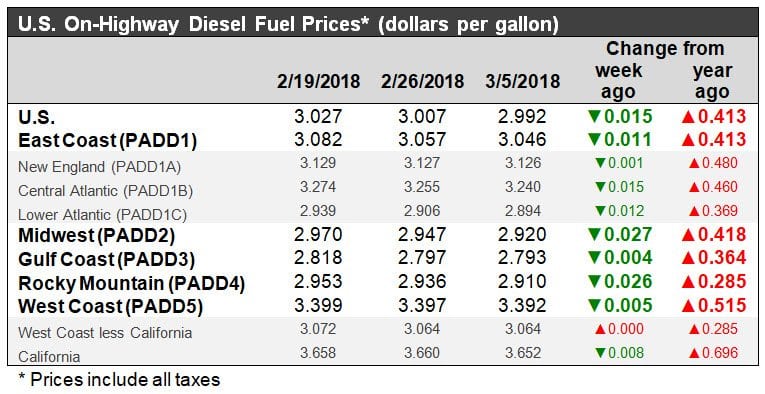 U.S. retail gasoline prices rose by 1.2 cents during the week ended March 5th, to arrive at an average price of $2.560/gallon.

For the current week ended March 5, East Coast PADD 1 retail prices for gasoline increased by 0.4 cents to $2.534/gallon. The average price was 24.9 cents higher than last year’s price. Within PADD 1, prices declined by 1.7 cents in New England to an average of $2.565/gallon. Central Atlantic market prices also fell by 1.7 cents to $2.647/gallon. Prices in the Lower Atlantic market rose by 2.6 cents, to an average price of $2.440/gallon. This was 22.5 cents higher than last year’s average price for the same week.

In the Midwest PADD 2 market, retail gasoline prices rose by 2.3 cents, reaching an average price of $2.428/gallon. Gasoline pump prices were 16.1 cents higher than they were one year ago.

In the Gulf Coast PADD 3 market, gasoline prices increased by 2.8 cents to average $2.278/gallon. PADD 3 continues to have the lowest average prices among the PADDs. Prices for the week were 18.4 cents higher than for the same week in 2017. 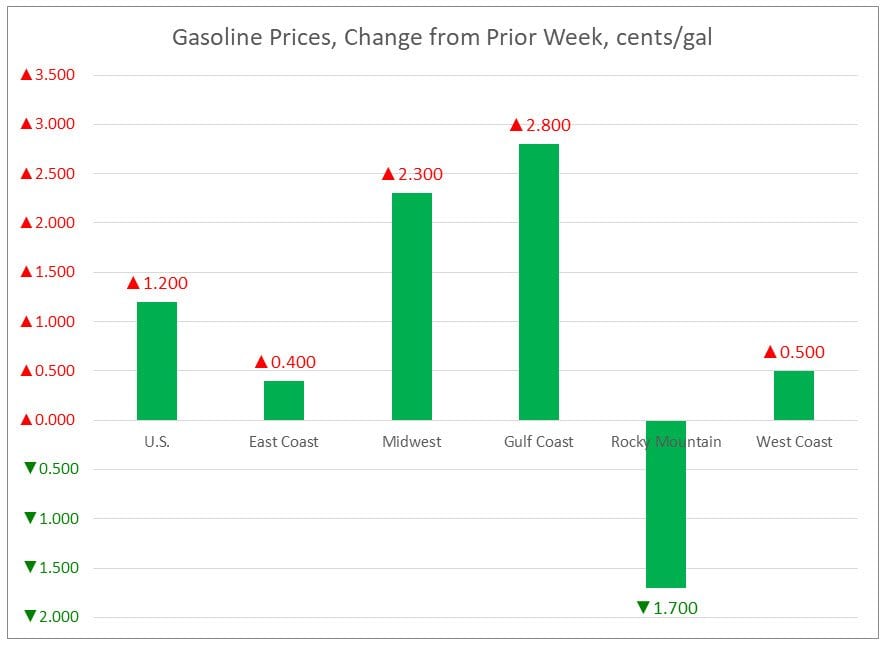 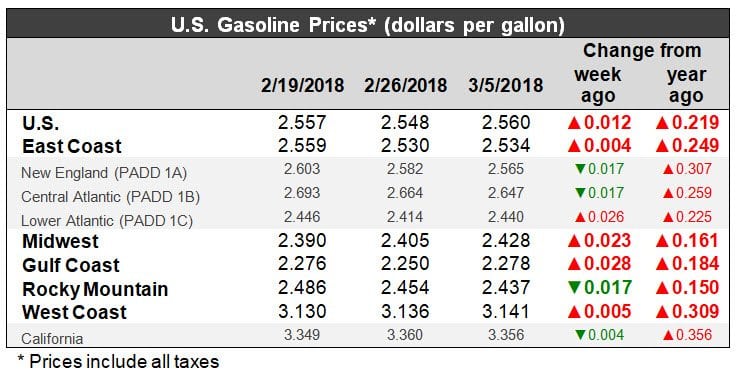 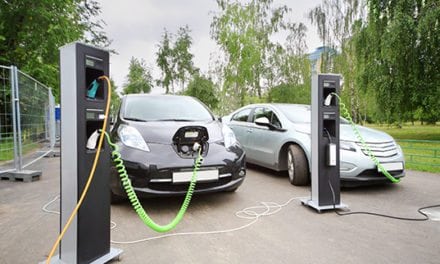 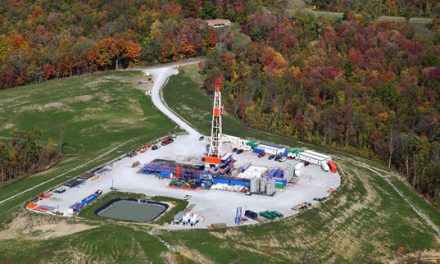 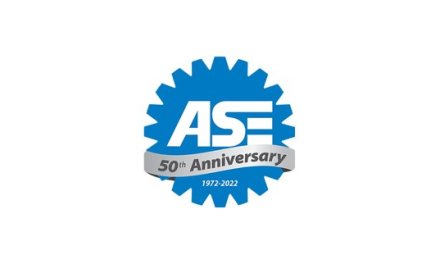