The U.S. Energy Information Administration (EIA) released its weekly data on diesel and gasoline retail prices for the week ended April 27, 2020. Retail prices continue to sink, as the COVID-19 pandemic causes severe demand destruction. The EIA publishes weekly “product supplied” data as its proxy for demand, and the latest weekly report shows that gasoline demand fell by 4,385 thousand barrels per day (kbpd) during the 5-week period from March 13 to April 17, dropping from 8,837 kbpd to just 5,311 kbpd in a matter of five weeks. Distillate fuel oil demand fell by 885 kbpd, falling from 4,013 kbpd to 3,128 kbpd. Jet fuel demand fell by 1,123 kbpd. In fact, the total U.S. product supplied data of 13,797 kbpd for the week ended April 10, 2020, was the lowest demand ever recorded since the EIA began publishing the series in November of 1990. Demand in January and February was over 20,000 kbpd. 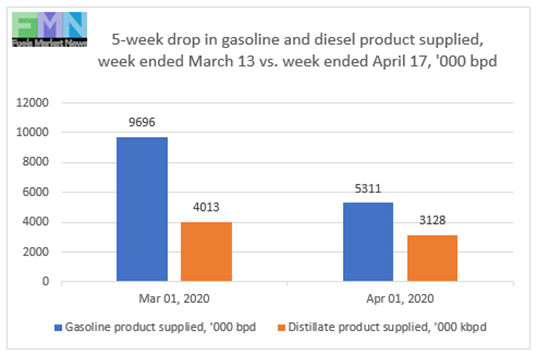 Retail prices for gasoline and diesel both fell once again. Diesel prices fell by 4.3 cents/gallon. Gasoline prices fell by 3.9 cents/gallon. The national average price for gasoline continued to descend below the $2/gallon threshold, averaging $1.773/gallon. This price was an incredible $1.114/gallon below the price for the same week one year ago. In February, just two months ago, retail prices for gasoline were higher than they had been a year earlier. Now, prices in four of the five PADDs have fallen below the $2/gallon level, with only the West Coast PADD 5 having retail prices above $2/gallon. From late-November through early March, gasoline prices had been above their levels from last year. Prices declined until, during the week ended March 2, retail gasoline prices were a mere 0.001 cent/gallon above last year’s level. The dramatic price declines since then have brought gasoline prices significantly below their levels of last year.

Diesel prices also had been above last year’s level, but prices are now well below their levels of last year. On a national average basis, the retail price for diesel averaged $2.437/gallon. This was 73.2 cents/gallon lower than the price in the same week last year. Retail prices for diesel have now fallen for sixteen consecutive weeks, shedding a total of 64.2 cents/gallon.

During the week April 20, 2020, to April 27, 2020, West Texas Intermediate (WTI) crude oil futures prices dropped by $7.98 (32.2%,) closing the week on Friday at $11.13/b. The week began with the shocking sight of WTI crude futures for May delivery at -$37.63/b. Infrastructure limitations and loss of liquidity had caused a collapse of never-before-seen proportions. June delivery contracts remained in the $20-$22/b range Monday, allowing many to conclude that this was closer to the “true” value of WTI crude. However, the collapse is indicative of a massive supply overhang, and June contracts are currently in the $11-$13/b range. Even with the prospect of partial re-opening of the U.S. economy, traders already are looking to move their June trades into July or August.

Retail prices for diesel have now fallen for sixteen consecutive weeks—every week this calendar year since the first week of January. Prices have fallen by a cumulative 64.2 cents/gallon. Retail diesel prices had been below the $3/gallon mark until the attacks on Saudi Arabian oil facilities in mid-September 2019. They rose at that time, and they remained above the $3/gallon mark until the week ended February 3, 2020. Prices have continued to slide. For the current week ended April 27th, retail diesel prices declined by 4.3 cents to settle at an average price of $2.437/gallon. For the current week ended April 27th, diesel prices fell in all PADDs countrywide. The national average price for the week was 73.2 cents/gallon below where it was during the same week last year. According to EIA data, diesel demand has dropped by 22% in the five-week period from March 13 through April 17.

In the Gulf Coast PADD 3, retail diesel prices dropped by 6.4 cents to arrive at an average of $2.208/gallon. This was the largest price drop among the PADDs. PADD 3 continues to have the lowest diesel prices among the PADDs, currently 22.9 cents below the U.S. average. Prices were 64.5 cents below their level for the same week in the previous year.

In the Rocky Mountains PADD 4 market, retail diesel prices fell by 3.7 cents to settle at an average of $2.434/gallon. PADD 4 prices were 74.9 cents lower than for the same week in the prior year. 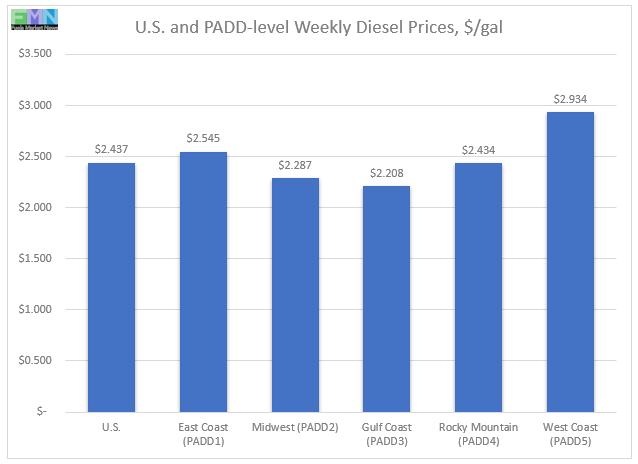 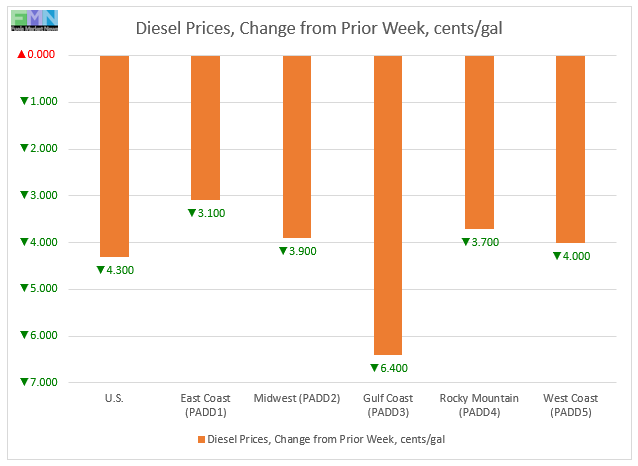 The COVID-19 pandemic continued to drive down U.S. retail gasoline prices, which submerged below the $2/gallon threshold during the week ended April 6. Prices continued to slide this week. Average retail prices dropped by 3.9 cents/gallon to average $1.773/gallon during the week ended April 27. Prices fell in all PADDs. Retail gasoline prices for the current week were an amazing $1.114 cents per gallon lower than they were one year ago. Until November, gasoline prices had been below their levels of last year. Prices then rose to surpass last year’s levels in all PADDs. The current downhill price slide has changed this, making gasoline a bargain—if you need it. It has been over four years since the average retail price for gasoline was below the $2/gallon mark.

Gasoline prices hit a peak of $2.903/gallon during the week ended October 8, 2018. Prices then slid downward for fourteen weeks in a row, shedding a total of 66.6 cents per gallon. In the next seventeen weeks, prices marched back up by 66.0 cents/gallon. Prices came very close to the peak they hit in early October. However, the months of May and the June brought an easing of prices amounting to 23.3 cents per gallon. The week ended July 1st reversed that downward trend and sent prices up once again. The COVID-19 pandemic is causing a severe contraction in demand as people shelter-in-place. According to EIA data, gasoline demand has collapsed by 45% in the five-week period from March 13 through April 17.

For the current week ended April 27th, East Coast PADD 1 gasoline retail prices fell by 3.4 cents to arrive at an average of $1.810/gallon. Four weeks ago, PADD 1 joined PADDs 2 and 3 in having retail prices drop below the $2/gallon line. The average price was 97.0 cents/gallon below where it was during the same week last year. Within PADD 1, New England prices declined by 2.8 cents to average $1.833/gallon. Central Atlantic market prices fell by 4.9 cents, arriving at an average of $1.997/gallon. Prices in the Lower Atlantic market fell by 2.8 cents to average $1.684/gallon.

In the Midwest PADD 2 market, retail gasoline prices fell by 3.2 cents to average $1.478/gallon. For the past five weeks, PADD 2 prices have been below prices in the U.S. Gulf Coast PADD 3 market, a rare occurrence. PADD 2 prices for the week were an incredible $1.287/gallon lower than they were for the same week last year.

In the Gulf Coast PADD 3 market, gasoline prices dropped by 3.6 cents to average $1.508/gallon. Six weeks ago, PADD 3 was the first to break the $2/gallon barrier, joined by PADD 2, then by PADD 1, and then by PADD 4. PADD 3 usually has the lowest average prices among the PADDs, but prices in PADD 2 have fallen sharply over the past five weeks, and PADD 2 prices are now the lowest in the land. PADD 3 prices for the week were a hefty $1.074/gallon lower than for the same week last year.

In the Rocky Mountains PADD 4 market, gasoline pump prices dropped by 5.7 cents, settling at an average price of $1.809/gallon. This week’s PADD 4 prices were $1.034/gallon lower than at the same time last year.

In the West Coast PADD 5 market, retail gasoline prices dropped by 6.1 cents to average $2.454/gallon. This was the largest price drop among the PADDs. PADD 5 typically has the highest retail prices for gasoline, and until mid-March it had been the only PADD where retail gasoline prices stayed above $3/gallon. Prices this week were $1.217/gallon lower than last year’s price. Prices excluding California fell by 8.0 cents to average $2.216/gallon, which was $1.079/gallon below last year’s price. California prices fell by 4.8 cents to average $2.652/gallon. California had been the last state where gasoline prices had remained above the $3/gallon line, but this changed the week ended March 30. On Thursday March 19, California led the U.S. by taking the dramatic step of ordering a statewide shelter-in-place to combat the spread of COVID-19. This order is affecting approximately 40 million people, and it is causing a dramatic drop in gasoline demand, as well as demand for other fuels including jet fuel and diesel. California retail gasoline prices were a massive $1.330 per gallon below their levels from the same week last year. 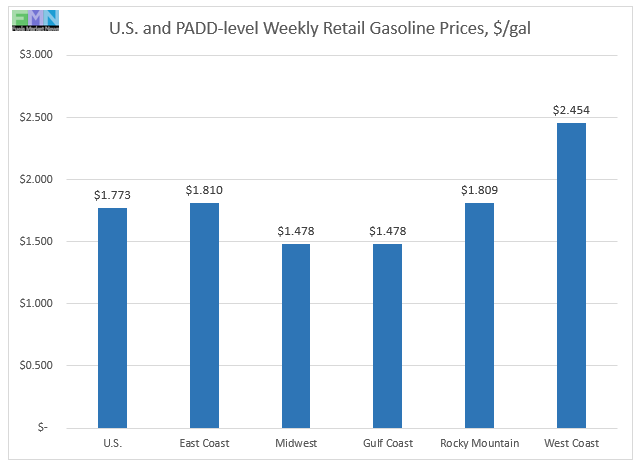 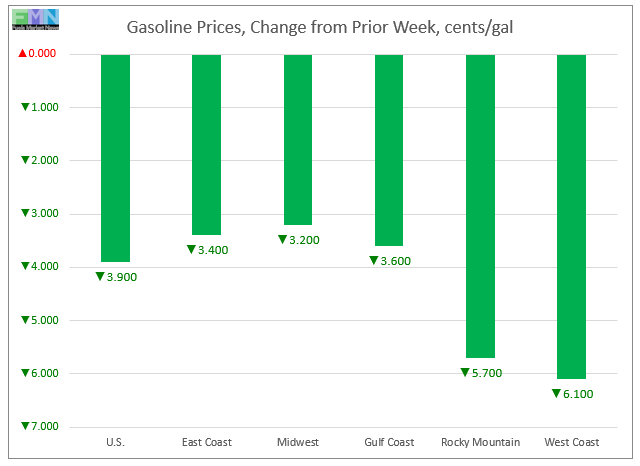 Clean Energy Names Stephen Scully Chairman of Board of Directors 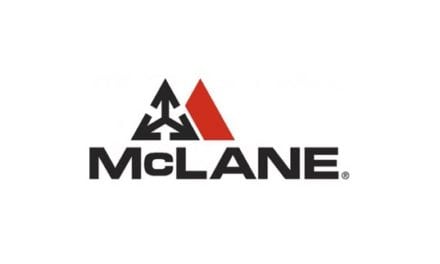 Kum & Go to Shift Its C-Store Business to McLane