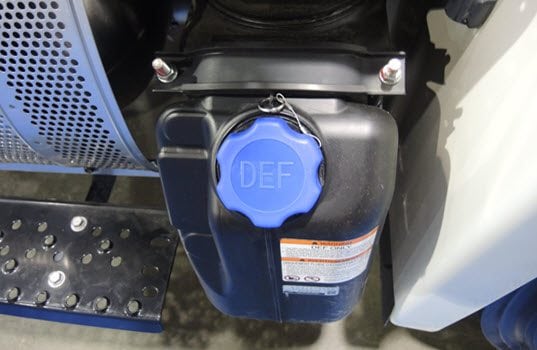 Exploring DEF supply and market ramifications during the pandemic with Integer Research.

Selective catalytic reduction (SCR) technology that relies on diesel exhaust fluid (DEF) is a critical product for modern clean diesel engines. In fact, without DEF these engines are programmed to either drop into low-performance mode or are locked out of being able to start. That makes DEF just as critical as diesel for keeping the trucks on the road. With the COVID-19 pandemic’s wide-ranging impact on numerous products and supply chains, now is a good time to look at how the pandemic is impacting DEF.

What is the current state of the DEF market, and how is that being impacted by COVID-19?

So, if the total mileage in a year happens to be the same as the mileage in a previous year, you would see diesel consumption declining because as the fleet turns over, the newer trucks are becoming more fuel efficient. But these newer trucks are consuming DEF and use SCR technology, which helps make trucks more efficient. What is happening with coronavirus is that trucks are driving less, and they are consuming less diesel, and if they drive less, they also consume less DEF. So that is why it is still a growing market, but instead of growing 13% this year, it is growing 5%.

With the DEF linkage to fleet turnover, how is the purchasing cycle being impacted by the pandemic?

Cardoso: Truck sales are dropping in 2020, and they were going to be low this year anyway because they were much higher than expected in 2019. We had already expected truck sales to drop by almost 30% this year. But now you have low economic activity— dealerships are shutting down, truck manufacturer servicing plants are down, and you have a declining supply as well. Now, we expect the sales to be a little more than 50% for 2020. That further impacts DEF consumption and for years down the road.

What is the market comparison with the United States and Europe?

Cardoso: A good proxy to DEF consumption [with the differences noted previously] is diesel consumption. If there is less diesel being consumed, trucks are driving less and consuming less DEF. The U.S. has a longer list of essential businesses so the loss in diesel consumption is [less steep] than you see in Europe. It dropped by 15-20% in the U.S. and is heading back toward normal. In Europe [in April], the drop in diesel was closer to 50% in some countries and gasoline closer to 80%.

Is the pandemic creating any supply chain disruptions?

Cardoso: We have not heard of any disruptions in terms of production and distribution—distribution facilities, terminals, etc. This has been mostly unaffected from the feedback we have received.

How are the DEF margins in general today? There have long been challenges related to truck traffic densities.

Cheyne: DEF profitability is mostly connected to high-volume diesel fuel locations. In almost every case, a reasonable-size truck stop has DEF at every pump and every fueling island. That has been led by big investments in past years by the major operators. And they have also invested in their own production and distribution, in some cases. For the larger players, the margins are good, with a reasonable return on investment. Even smaller and independent operators do well if they have the diesel volume and have enough throughput that they probably already have DEF at the dispensers. When you get to smaller filling stations and locations in city centers and rural locations, the argument for the full installation of underground tanks would be much more difficult. In those cases, you would often have jugs as the main solution. There is also a large segment of pickup trucks and other small vehicles using DEF, and there is a very profitable packaged product business with jugs.

How are totes being deployed today?

Cheyne: Totes are still in use but are not as critical as they used to be. There are companies that provide tote refill as part of their business and who have customers that have sites at their own facilities. Butmany of these companies encourage customers to switch over to more permanent bulk storage, even if it’s quite limited—the capacity of two to four totes. They use that to lock in customers with service contracts and deals on equipment.

[Automotive] dealerships have traditionally been a major market for totes, but as DEF becomes more available, you see fewer drivers going to the dealers to refill.

The clean diesel folk, such as those at the Diesel Technology Forum, are very bullish on the technology. In fact, these new diesels are very clean. However, there is also a push for electrification in all vehicle segments. What impact do you see from these developments?

Cardoso: There is more and more talk about electrifying the truck fleets. We take that into account, but generally we see smaller trucks making that shift. It is difficult to see that so much with Class 8, long-haul trucks. We still see diesel as the primary powertrain for those vehicles. California is pushing very ambitious targets on new, heavy duty [electric] truck sales. Of course, if that goes through it can have an impact on DEF consumption not just in California but any other states or countries that might follow the same approach. But that is a longer-term issue.

When the Phase II requirements for truck fuel efficiency and emission reductions were being discussed, there was great uncertainty over what role DEF would play in the solution. California’s ARB’s initial NOx requirements seemed to work against SCR technology.

Cheyne: So far, the discussion has been quite pragmatic about how far we can push NOx before there is a big fuel efficiency impact. California was pushing for an ultra-low NOx limit [from 0.2 gram per brake horsepower-hour to between 0.015 and 0.035 gram per brake horsepower-hour]. That would have required extra technology, like waste heat recovery and other novel approaches, which would have been difficult to implement and would likely hit durability.

But now that EPA is involved, truck makers are bridging the gap between EPA and CARB. The concession will likely be 0.1 or 0.08, which is achievable with current technology. And it is also more reliable because it is just extending existing technologies, which is always safer than putting in something new. That will likely mean mostly SCR and DEF, so we think it will probably be a net gain for DEF consumption. Even after that regulation, there’s talk about things like double [DEF] dosing systems, which we have seen in passenger cars in Europe. That is taking advantage of the mileage properties with SCR and using DEF as a way of reducing fuel consumption. We expect that we will probably see a continuation of the trend toward increasing DEF consumption per mile.

Integer Research was founded in 2003 as a specialist provider of research, data, analysis and consultancy services across the fertilizer, DEF/AdBlue, and wire and cable markets. The company was acquired by Argus Media in 2018